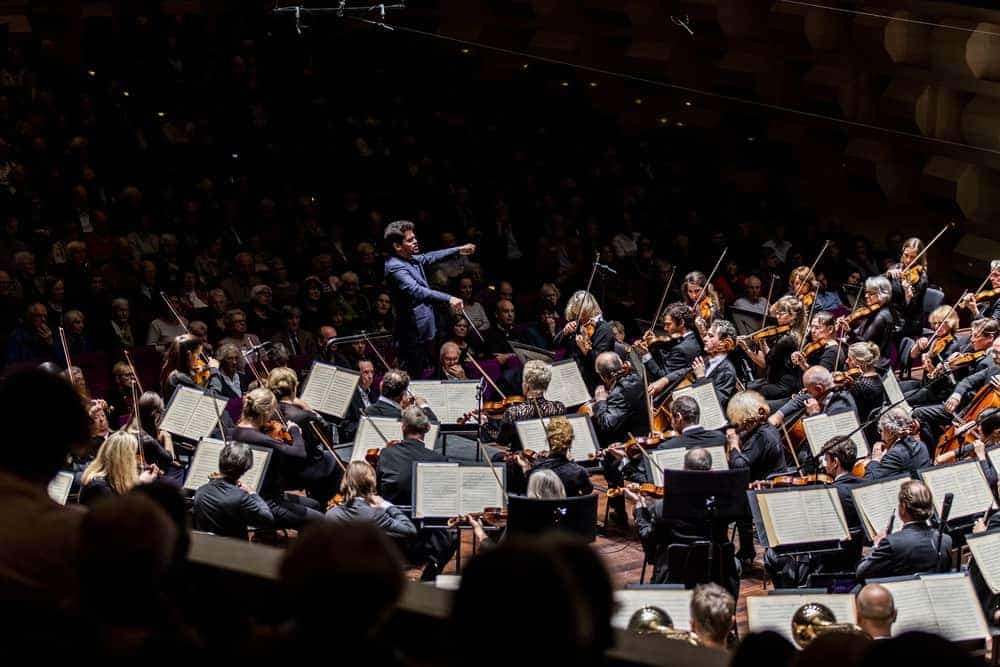 Rotterdam Philharmonic Orchestra conducted by Lahav Shani 📷 Guido Pijper
After a concert year full of limitations, 2021-22 will be a season of plenty for the Rotterdam Philharmonic Orchestra. The orchestra presented its new concert programme, which radiates ambition and confidence in the future.
Star pianist Yuja Wang joins the orchestra as Artist in Residence and Martha Argerich will also return. There is once again room for great repertoire: Mahler, Pijper and Rachmaninov led by chief conductor Lahav Shani, Sibelius' epic Kullervo with an eighty-strong Finnish male choir and a concertante Wagner opera with world soloists led by honorary conductor Yannick Nézet-Séguin. Ticket sales will start on 17 August via the orchestra's website.
George Wiegel, general director: "Soon, the doors to our hall will finally open for real, the rows of seats will fill up and the whole stage will be filled with orchestral musicians. That moment is the beginning of the most beautiful, precious, meaningful concert season for a very long time."
Lahav Shani, chief conductor: "Even though we have enjoyed playing the smaller repertoire over the past year, the Rotterdam Philharmonic is primed for the big symphonic works. I am looking forward to playing the big pieces again, that is where you can really see and feel the full power of the orchestra."

Yuja Wang, renowned for her virtuosity and musicality, is the Rotterdam Philharmonic Orchestra's Artist in Residence this coming season. She will be soloing in three concert programmes, starting in September with Shostakovich's Second Piano Concerto conducted by chief conductor Lahav Shani. In December, she returns with Rachmaninov's Second Piano Concerto, to close the season in May in a concert conducted by the honorary conductor Valery Gergiev. In that season finale, she will perform two solo works: Strauss' Burleske for piano and orchestra, followed by Liszt's First Piano Concerto. A tour of Europe, to Hamburg, Munich and Vienna, among other places, with the orchestra is also part of Yuja Wang's year as Artist in Residence.

Apart from Yuja Wang, the Rotterdam Philharmonic Orchestra welcomes a host of other star soloists in 2021-2022. Martha Argerich plays Ravel's Piano Concerto in G, Simone Lamsma solos in Tchaikovsky's Violin Concerto and with Nicolas Altstaedt, Truls Mørk and Sol Gabetta the orchestra welcomes three of the greatest cellists of our time. Among the vocal soloists are world stars such as Karen Cargill, Tommi Hakala, Christiane Karg, Mikhail Petrenko and Michael Volle. There are also two soloists from our own ranks: bassoonist Pieter Nuytten and flutist Joséphine Olech, who will play the public premiere of the Flute Concerto by Thierry Escaich, which was composed especially for her.

The Rotterdam Philharmonic Orchestra welcomes major specialists: composer-conductor John Adams will be conducting his own work, maestro Jukka-Pekka Saraste is coming for a continuation of the Sibelius Festival and will be taking the epic scores of the Kullervo and Lemminkäinen with him, and baroque specialist Jonathan Cohen will be performing the Messiah, which will be performed by the Rotterdam Philharmonic for the first time in 50 years. Han-na Chang makes her debut with a complete Prokofiev programme.
Former chief conductor Edo de Waart will conduct a concert in honour of his 80th birthday, in which the wind section will play a starring role, and honorary conductor Valery Gergiev will conduct the closing concert of the season with Yuja Wang. Honorary conductor Yannick Nézet-Séguin will perform Mahler 4 and follow up the acclaimed success of Die Frau Ohne Schatten with another concertante opera: Wagner's Das Rheingold.
Chief conductor Lahav Shani will conduct seven different programmes. As a conducting soloist, he can be heard in Mozart's Piano Concerto No. 23. The great works are represented in his concerts by Rachmaninov's Symphonic Dances and Mahler's First. Much attention is paid to new and little-performed repertoire: commissioned works by Thierry Escaich and Mathilde Wantenaar, the rarely heard Second Symphony by Willem Pijper for colossal orchestra, plus the First Symphony by Paul Ben-Haim and the Violin Concerto by Kareem Roustom, two Dutch premieres as part of a Remembrance Concert. With Lahav Shani, the orchestra concludes the season with a tour of Asia.

Ticket sales for the 2021-22 season of the Rotterdam Philharmonic Orchestra will start on 17 August via their website.