The bridges of Rotterdam - interesting facts and details 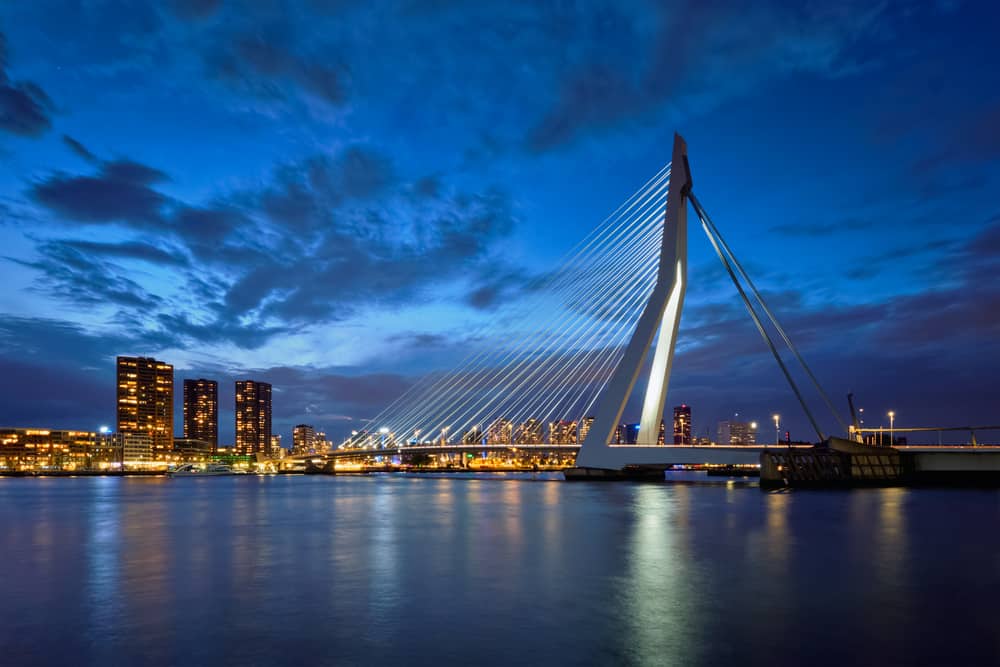 The bridges of Rotterdam

Rotterdam is home to four beautiful and famous bridges; Erasmusbrug, Willemsbrug, De Hef and Van Brienenoordbrug. You might have heard of, or even driven across them before. But, how much do you actually know about them?

The Erasmusbrug connects the northern and southern halves of the city by bridging the Nieuwe Maas river. What's cool about the bridge is that it's both a cable-stayed bridge and drawbridge (bascule) in one. The bascule section allows safe passage for ships which are too large to pass under it. The Erasmusbrug is the biggest and heaviest of its kind in all of Western Europe. It also has the largest panel (of its kind) on earth. The bridge is 802 meters long and carries multiple vehicle lanes, tram tracks, bicycle lanes and sidewalks. 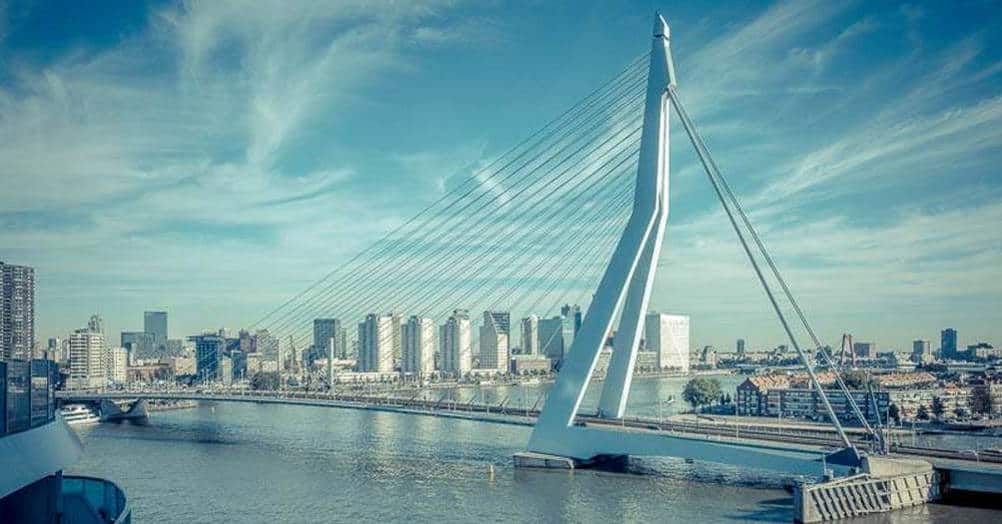 The Erasmusbrug is named after humanist and theologian 'Desiderius Erasmus Roterdamus' (1466 - 1536).  It was designed by Dutch architect Ben van Berkel (UNStudio). The construction of the Erasmus bridge cost in excess of 165 million euros. It was officially opened by Queen Beatrix on September 6th, 1996. The bridge is a well known national landmark and has been featured in Red Bull Air Race as well as the 2010 Tour de France. It's also the home of the annual National Firework show. The construction of the bridge brought about much needed economic development for the Kop van Zuid area.

The Willemsbrug connects the Rotterdam city centre to Noordereiland. From Noordereiland, you can cross the Koninginnebrug (Queen's bridge) into the Feijenoord area. The Willemsbrug is also a cable-stayed bridge, as is the Erasmusbrug. However, the Willemsbrug doesn't have a drawbridge to allow larger vessels to pass through. It's 318 meters long and 33 meters wide. 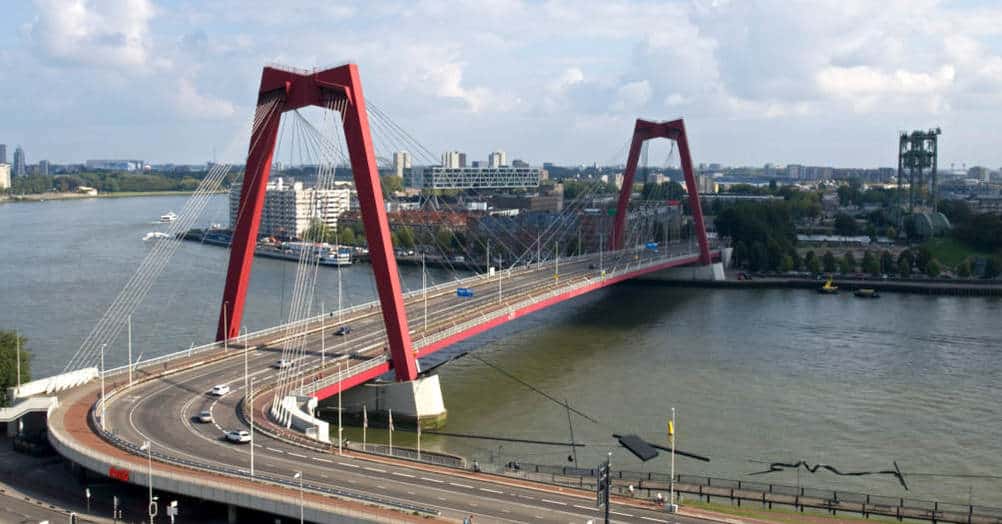 Few people know this, but the Hef is actually called Koningshavenbrug. It's a decommissioned vertical-lift bridge which used to be part of a railway line connecting the city of Breda to Rotterdam. The Hef has a length of 79 meters and carries 2 railway tracks.

The Hef was designed by Dutch engineer Pieter Joosting and was officially opened on the 31st of October, 1927. It was the first of its kind in all of Western Europe. The bridge was severely damaged by the Nazi bombardment in 1940, However, due to its significance to the railway system, it was quickly rebuilt. The Hef hasn't been used since 1993 and is listed as a national monument.

The Van Brienenoordbrug connects the Eastern part of Rotterdam with the south side of the city. It's a twin tied-arch motorway bridge. But would you guess that one of the arches is actually 25 years older than the other? The original single arch bridge built in 1965 was so heavily used city officials eventually decided to double its width by adding a second, almost identical arch, in 1990. The Van Brienenoordbrug is 1320 metres long and carries 12 lanes of traffic. On any given day, over 250,000 vehicles will cross the bridge. The Van Brienenoordbrug is part of the busiest highway in the Netherlands, the A16. The bridge itself is the longest of its kind in the Netherlands. 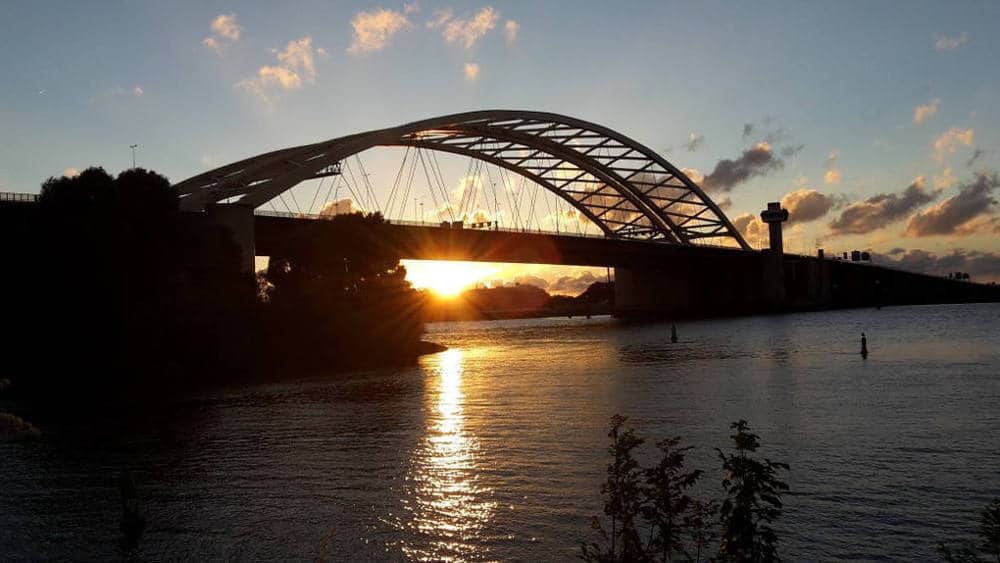 The Van Brienenoordbrug wasn't named after an individual. The name actually refers to the island upon which it's partially built: Eiland van Brienenoord. The island, in turn, was named after baron Arnoud Willem van Brienen van de Groote Lindt, who used to own the island. The bridge also has a bascule (drawbridge) section which takes approximately 18 minutes to open and close. Luckily, this rarely is the case. Of the 140,000 ships that pass through the bridge, only 500 require the bridge to open and close. The Van Brienenoordbrug was designed by W.J. van der Eb and W.P. Goedhart.