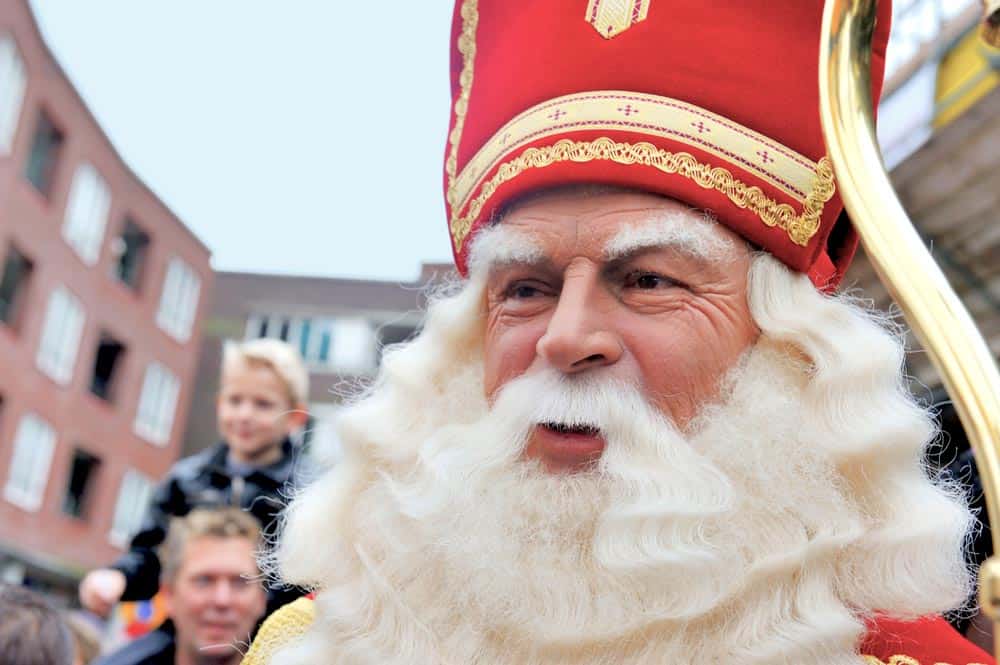 Sinterklaas arrives in Leidschendam in 2010 📷 jehoede
Sinterklaas arrives in the Netherlands every November. He sails all the way from Spain in a steamboat with loads of gifts and candy. His helpers deliver the gifts on the night of December 4th. Sinterklaas is celebrated on December 5th.
Every November, it’s that time of the year again. “What?” will all non-Dutch people say. “Are you kidding? Its only November, there’s a full month to go!” And “I know” will all Dutch parents of younger kids utter breathlessly, since they have been busy preparing since June. Yes, in the Netherlands November is that time of the year again. All over Europe, families get excited – one way or another – about Christmas.
In the Netherlands, Christmas exists, and it’s a good reason to meet the family, decorate the house and eat yourself silly. Sometimes there are presents involved. But especially if you are a Dutch child, the real excitement starts earlier, for Sinterklaas. During his yearly visit to the Netherlands, Sinterklaas might also show up at kindergartens and schools all over the country.

What makes Sinterklaas so special?

Sinterklaas delivers gifts and arrives from Spain in a steamboat. He’s got a white horse called Amigo (ask every Dutch person you can find; they’ll all validate this fact). He’s also got helpers who are all called Pete. They make sure children who have been good get presents and children who have not, go in the sack and are taken to Spain. (I guess that’s why it only works for smaller kids, bigger kids would probably voluntarily join a free ride to Lloret de mar).
Once Sint has arrived in the country, kids should put their shoe near a fireplace or window and place a carrot or other edibles inside. This is meant as a snack for his horse. Because if you do, chances are Sinterklaas will come to find you and leave a little something in your shoe. This works from his time of arrival up to the time he leaves - which is on 6 December. Tradition states that certain sweets are eaten (peppernuts, spicenuts, almond bars etc). 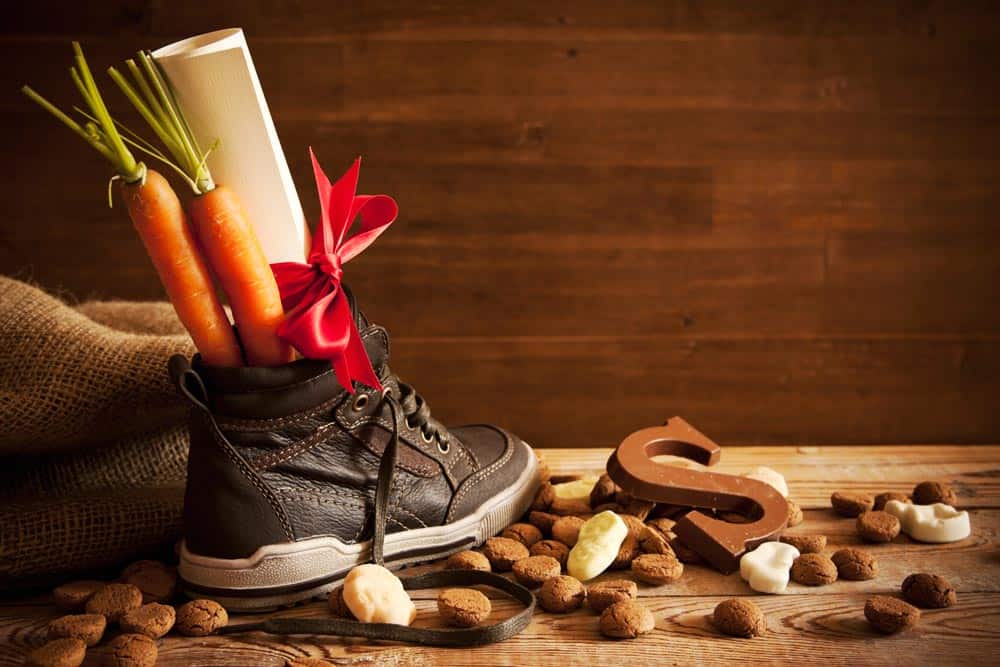 Leave a shoe out with snacks and you might find a gift the next morning
On 5 December, people celebrate Sinterklaas. It's also called 'pakjesavond' (gifting evening). Traditionally, Sinterklaas' helpers would have already delivered presents the night before by sliding down chimneys of every home. Often, people stop working earlier on 5 December, but Sinterklaas does have a habit of only coming after dark, which is after around 16.00 in November.
Older children are also allowed to join in the fun, even if they stopped ‘believing’. After the age of about seven, the whole tradition turns with an unexpected twist. Once you start giving your own presents, you are first to compose a rhyme or poem about the person you hand it to, and secondly, you are to disguise your presents to the point of unrecognisable. People can be busy with those present disguises from begin November, to make sure the teapot hides well in a guitar case.

Is he really coming?

Every year the big question is: Will he arrive? Will he be on time? Will he bring all the presents? Will he have the book with the wishes and all the rest? And will I get something? Just like it should be. And to make sure every child in the country asks these questions, Sinterklaas journals and various movies raise these questions every year again. 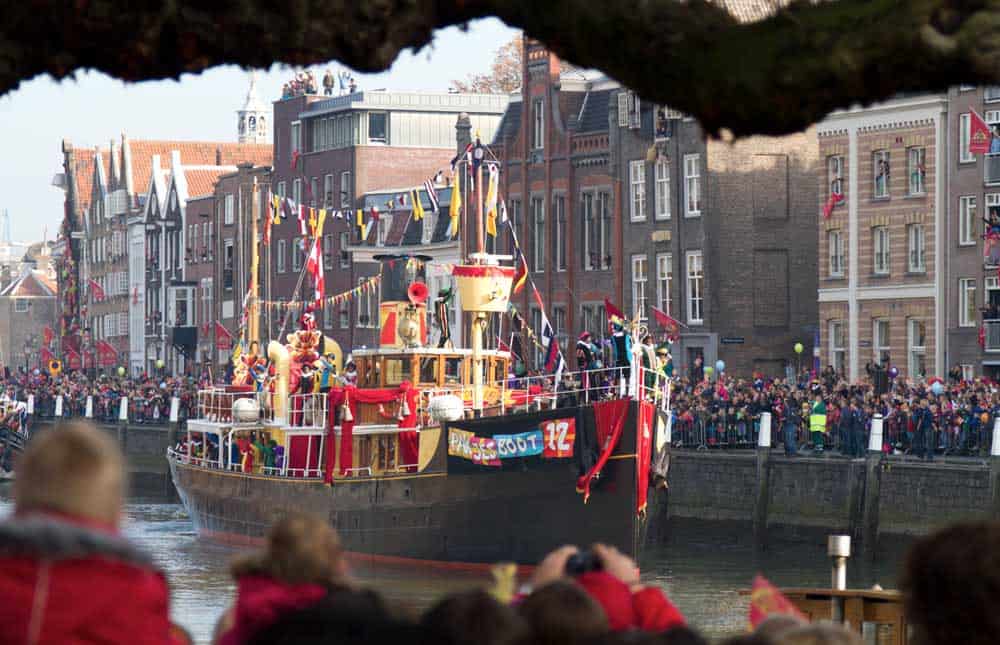 The arrival of Sinterklaas will be officially announced on Dutch television and there will also be an official arrival place which varies from year to year. The arrival is broadcasted on TV, so if something prevents you from going to see him live, you can always join from the comfort of your own living room. However, he also arrives in every bigger place, certainly in the cities and in some villages too.
Sint appears in style with the boat in Rotterdam on Saturday 16th this year, so if you want to join the celebrations and have a nose around on how the festivities work just see this website for more details. He will leave on 6 December, which is often also shown on Dutch TV to make a point. Sinterklaas departure then makes way for all things Christmas. 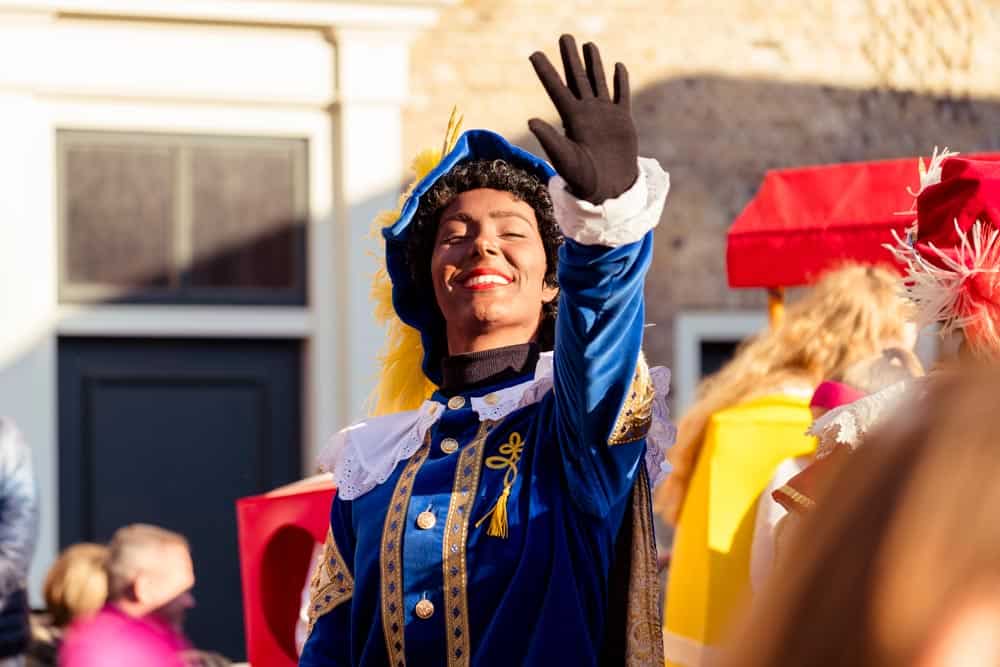 Sinterklaas mythological figure is founded on a real person. (To make matters confusing: He is the base of the American Santa but has nothing to do with Christmas). His figure is based on Saint Nicolaas van Myra, who did exist. Legend has it he was a soldier in the times of the Roman empire. Seeing that the empire covered half of Europe he could have come from anywhere, but -spoiler- most likely the depiction of him as a white bloke wasn’t realistic. Nicolaas once split his coat in two, to give one part to a freezing beggar. After that, he decided only to do good and eventually became a Saint and a bishop.

For decades, there has always been some kind of opposition to Black Pete. However, in recent years, the Black Pete (Zwarte Piet) discussion has really divided the country. It’s not about Sinterklaas himself. It’s his helpers who are the cause of the trouble. As a mythological older man, Sinterklaas can’t be expected to go down every chimney and do all the work himself. Just as Father Christmas and similar figures, he needs helpers. This is widely accepted. The only problem in the Netherlands is the way these helpers are portrayed.
In the Netherlands, Black Petes are traditionally played by white people wearing blackface, clothes from colonial times, afro wigs, red lipstick and creole earrings.
In recent years, this tradition has come under a lot of local and international scrutiny. As critical voices grow louder, the push to modernise the tradition has been gaining a lot of momentum. The result of which is that Black Pete is slowly being phased out in all the major cities and replaced with alternatives. As of 2020, Rotterdam only has 'Sooty Petes' at the official events, meaning the helpers now look less like caricatures and more like people who have actually climbed down chimneys.