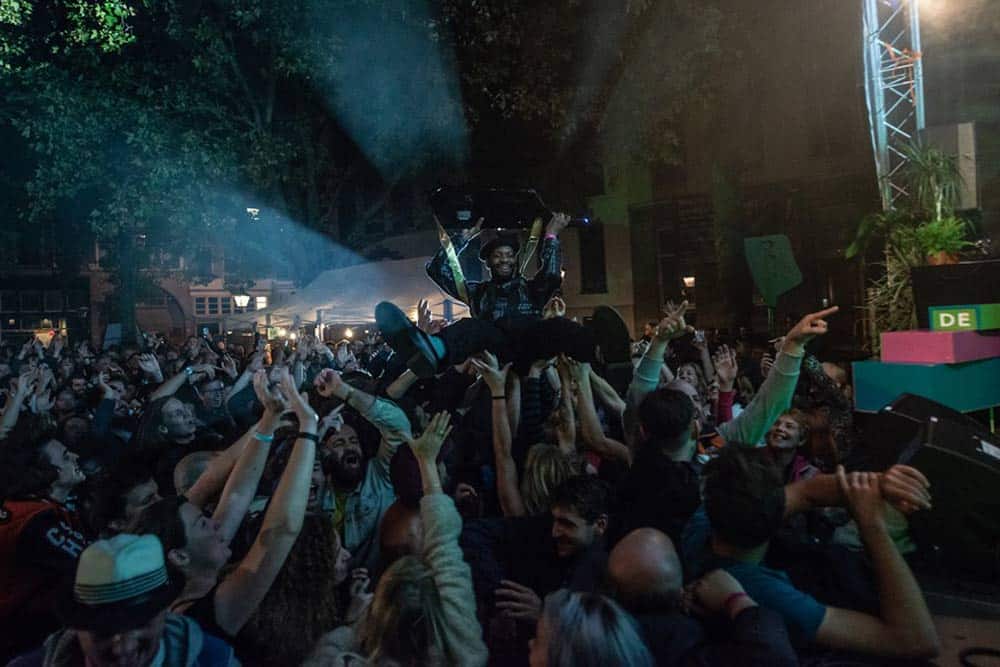 Festival Downtown is known and respected for its progressive and above all diverse line-up. Each year, the Festival is looking to grow and aims to do so by booking solid headliners and local heroes and niche artists. Although the Festival is generally aimed at electronic and electronically inspired music, there is a lot of diversity on offer. At Festival Downtown, there's room for singer-songwriters, non-western artists, progressive hip-hop as well as electronic punk and the thickest heavy bass from the UK.

This year, at WORM, Club Vibes and Brasil Binkie, expect to see, among others:

This year, the partly freely accessible festival will once again grow in the number of participating venues: in total, there are fifteen fixed areas and one pop-up. The main festival locations are WORM, Club Vibes and Brasilbinkie.

WORM
WORM is divided into two areas. In the upstairs room, Downtown brings together two movements that originated in Jamaica and developed further in the UK.

The Soundsystem culture has its origins in the Jamaica of the early 1950s. When large groups of Jamaicans emigrated to the United Kingdom, they were rejected in many clubs and pubs. By literally building their own big speakers, they were able to celebrate their own culture. In the suburbs of the big British cities, reggae and dub music melted together with genres such as hip-hop into a new genre: grime. In those suburbs, this movement among young people is the dominant culture. One of the biggest sound systems is active in Rotterdam: Masego. For the festival, they will be linked to the Rotterdam-based Grime collective BASH, which, among others, the UK grime-legend Roskovoor managed to snare the festival.

In the downstairs hall of WORM, the festival enters into a collaboration with the young Rotterdam collective Hunna and the stubborn Rotterdam label Hard Headerz. Both have their origins in hip-hop but are also clearly influenced by what is happening in the UK in the field of grime and related genres. The hip-hop label 1OAK is currently in the spotlight. 1OAK is the label Sevn Alias founded after he decided to leave the successful Rotterdam Airlines, where he was seen as the undisputed leader. Halfway through June this year the long-awaited compilation album was released on tracks of 1OAK members Sevn Alias, Lucass, Mensa, Bokke8 Philly, Beertje and Cinco. This will be one of the first shows of 1OAK as a collective.


Club Vibes
For the better electronic raw sound, Downtown joins forces in Club Vibes with the Rotterdam booking office Cloudhead (a.o. De Likt, Hausmagger and Juiceboxxx) and the Dutch indie music platform The Daily Indie. Headliner there is the Belgian Raketkanon. Known for their epic shows at festivals such as Zwarte Cross, Paaspop and Pukkelpop, the group released their new album RKTKN#3 along the way; a record full of dystopian, electronic beats, synth-layered soundscapes and hypnotic grooves.
The South African dreamnoise-duo Medicine Boy currently operates from Berlin. With their progressive, electronic music, they embody a true do-it-yourself-punk mentality. Although their latest album Lowerop was released under the prestigious label Fuzz Club, this duo still does their own management and all bookings all by themselves.

The Rotterdam-based super group THE DEAD CVLT, consisting of hardcore drum&bass legends Thrasher and Limewax and hardcore punk legends Lemmy and Sjarm13, will open the evening.

Brasilbinkie
Brasilbinkie is located in the middle of the skatepark on West-Blaak. But during Downtown, this place is transformed into a club. In collaboration with Pantropical, Bass Odyssey and Noodlebar, they'll host an experimental program.

Rotterdam is known all over the world for the only musical genre that ever originated in the Netherlands: gabber. This movement went around the world and was picked up in Indonesia. There, the rave-weirdo's of Gabber Modus Operandi mixed it with metal, noise and indigenous music. In electronic music, this absolute buzz act has been around for some time now and will release their already legendary album HOXXXYA this month.

Later in the night, Fracture will take over the show. Besides being a veteran deejay, this heavy bass pioneer is the man behind the London Astrophonica label.

In the basement of Brasilbinkie, Festival Downtown will shine a light on the development in the field of modular synthesizers with none other than DRVG CVLTVRE as the headliner. The show on the modular stage will be broadcast via a Silent Disco system; a world first!

Though the festival takes place at multiple locations, the line-up at WORM, Club Vibes and Brasilbinkie are extra special. To attend the shows at these locations, you need to get a ticket. An All Areas wristband is also available in limited quantities. The shows at the other venues are all free.

What to expect at Festival Downtown Rotterdam

You can find the official festival line-up and ticket information on the Festival Downtown website.