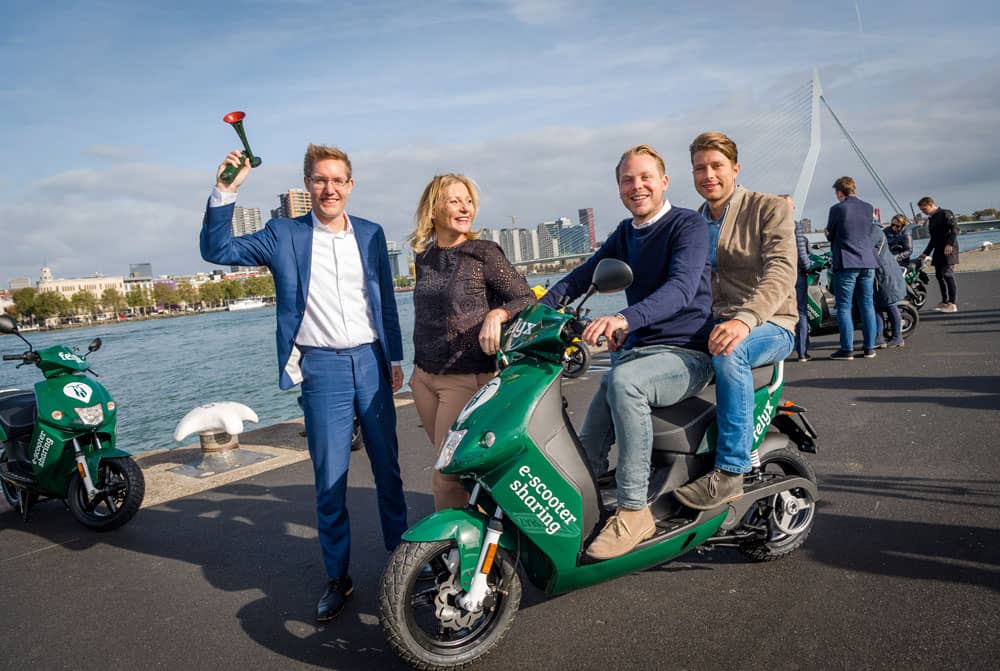 felyx electric scooter sharing now available in Rotterdam
On Wednesday, October 3rd, the electric scooter-sharing service felyx officially became available in Rotterdam. With 324 green e-scooters, the start-up introduces a new and simple way of travelling in the city.
According to felyx, the dark green e-scooters will quickly become part of Rotterdam's street scene and allow users to contribute to a cleaner and quieter city. The scooters are completely electric and run on Dutch green energy.

Amsterdam had already been active in Amsterdam for some time albeit with a much smaller fleet of vehicles. Earlier this summer it was announced that the startup had raised €3 million to realize the expansion to Rotterdam. Alderman Arno Bonte of Sustainability, Air Quality and Energy Transition today gave the go-ahead for the sharing service in Rotterdam.
Alderman Arno Bonte about felyx: "Sharing means of transport is the future and if this also happens electrically, I am very happy about it. This initiative makes a great contribution to Rotterdam's ambition to make the city's air cleaner."
Co-founder Quinten Selhorst: "The introduction in Rotterdam is not only a milestone for felyx, but also for the concept of electric shared transport. After Rotterdam, we hope to convince other cities of the advantages that felyx has to offer. "

How does felyx work?

By using the felyx app, a user can immediately find an e-scooter in his surroundings. At a price of € 0.30 per minute, the user can then move from A to B, without any delays or other transport problems. Upon arrival at the destination, the e-scooter can be parked according to existing laws and regulations and locked up by logging off the ride in the app. The felyx app is available for Android and iOS.

The felyx service area in Rotterdam

At the time of this writing, felyx is mostly available in the city centre and surrounding areas such as Kralingen, Blijdorp, West, Noord and Hillegersberg. Residents who live across the river (Rotterdam South) or up north (Schiebroek) currently will only be able to log off from the scooter in specific areas highlighted within the app. In Rotterdam South, there's a designated area at Feyenoord stadium. In Schiebroek, there's a spot near the Peppelweg.
According to felyx customer support: "the service area in Rotterdam is currently set up in a way that we think will serve as many felyx users as possible. But of course, we do not know if this will be the case in practice. So, chances are that the service area will still be regularly adjusted in the first few months."
For more information, visit www.felyx.nl