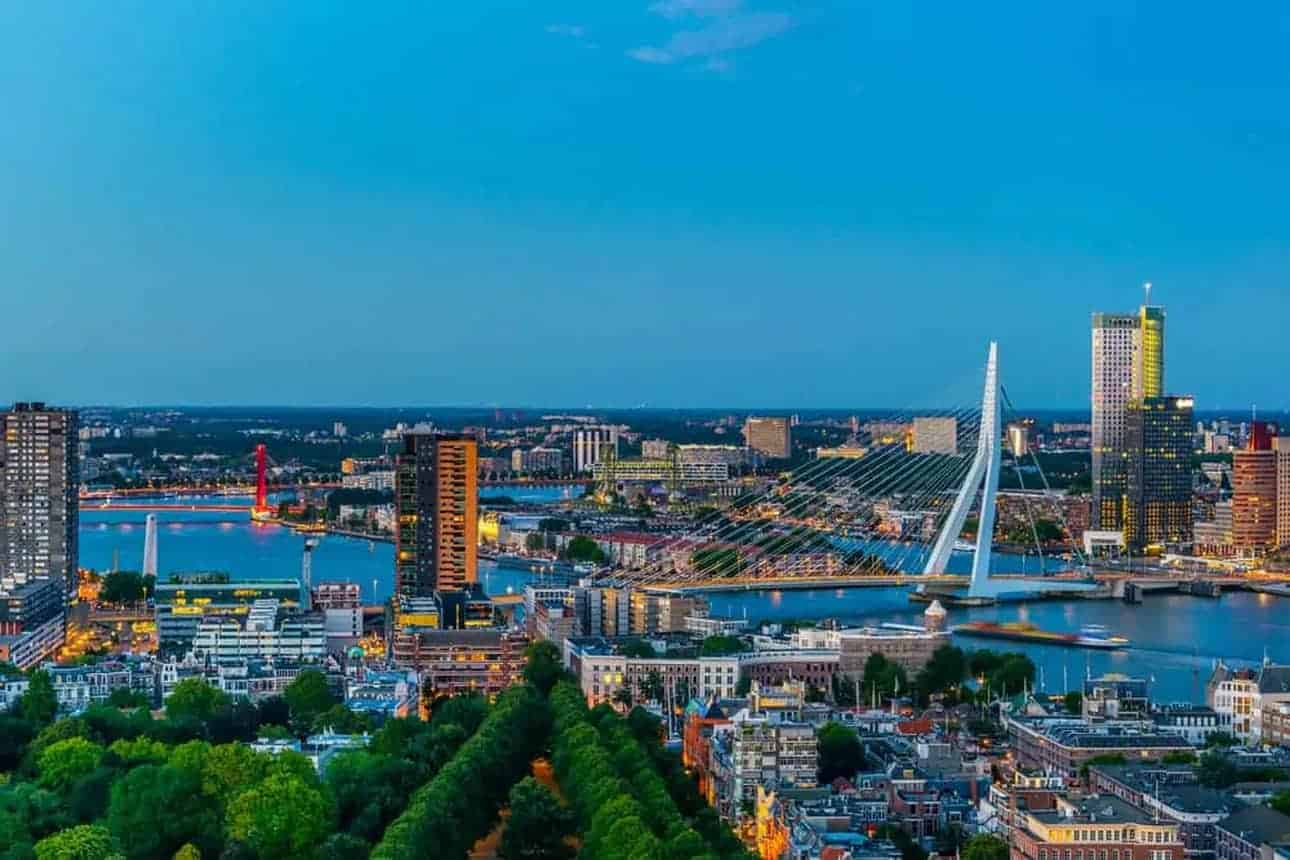 Aerial view of Rotterdam at sunset
Without a doubt, Rotterdam is among the most photogenic cities in Europe, and for various reasons. The city has an eccentric mix of popular, cosmopolitan landmarks as well as amazing hidden gems that many visitors don't get to see. To help you complete your Rotterdam holiday photo album, here is a list of the top photogenic spots in the city.
Dust off that lens, or get yourself some new photography equipment

, and let's go take some beautiful photos! We've included a bit of everything here, from modern architecture, old buildings, bridges, canals and landscapes. 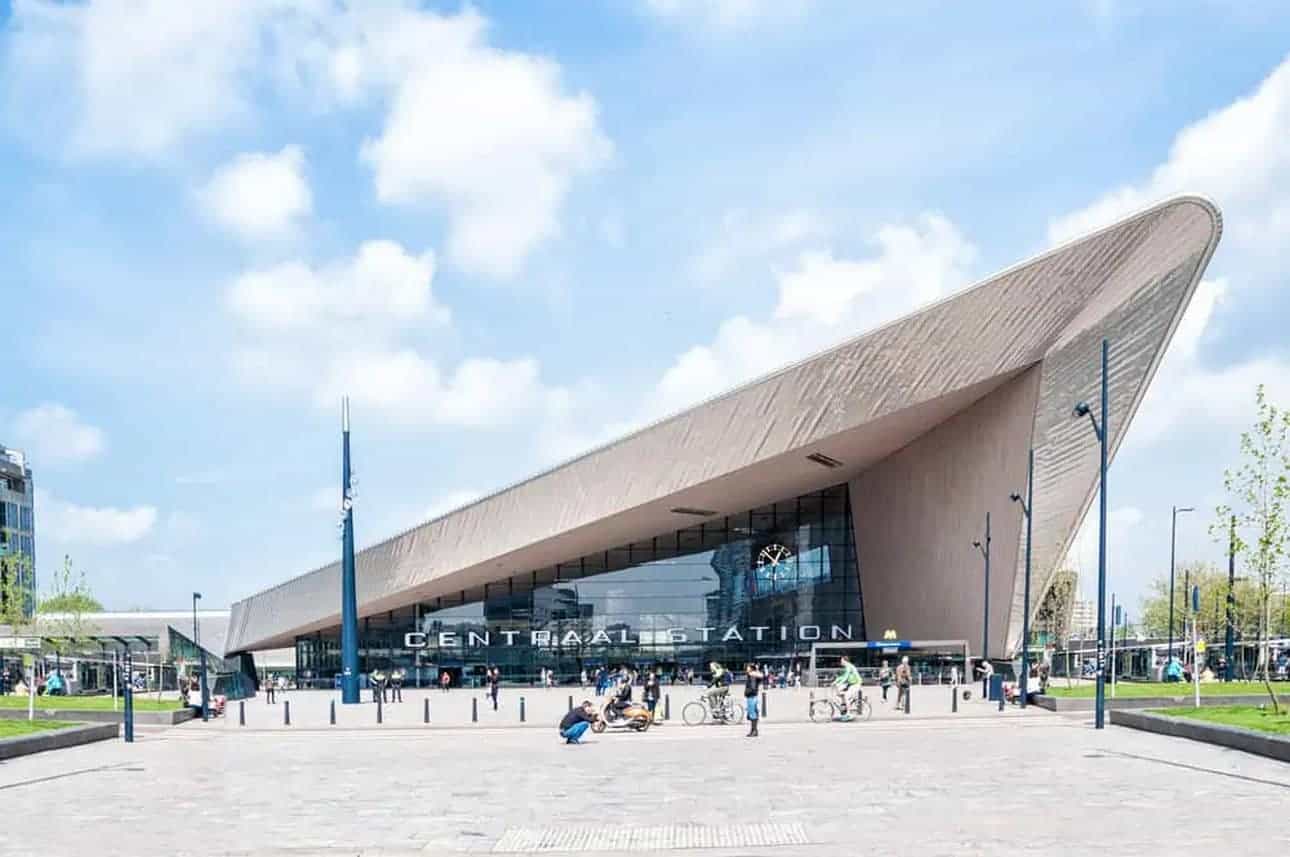 Rotterdam Centraal
Chances are, Rotterdam Centraal is your very first stop when you come to Rotterdam, and it's a good one. Rotterdam's main public transport station was originally built in 1957, but later completely renovated in 2014, or should I say, completely rebuilt. It looks nothing like it did before. When visiting Rotterdam, capturing this work of art with your camera is a must. Tip try shooting a photo from the inside looking out, for an additional perspective that is equally stunning. Go up the stairs near the bathrooms for another interesting view. 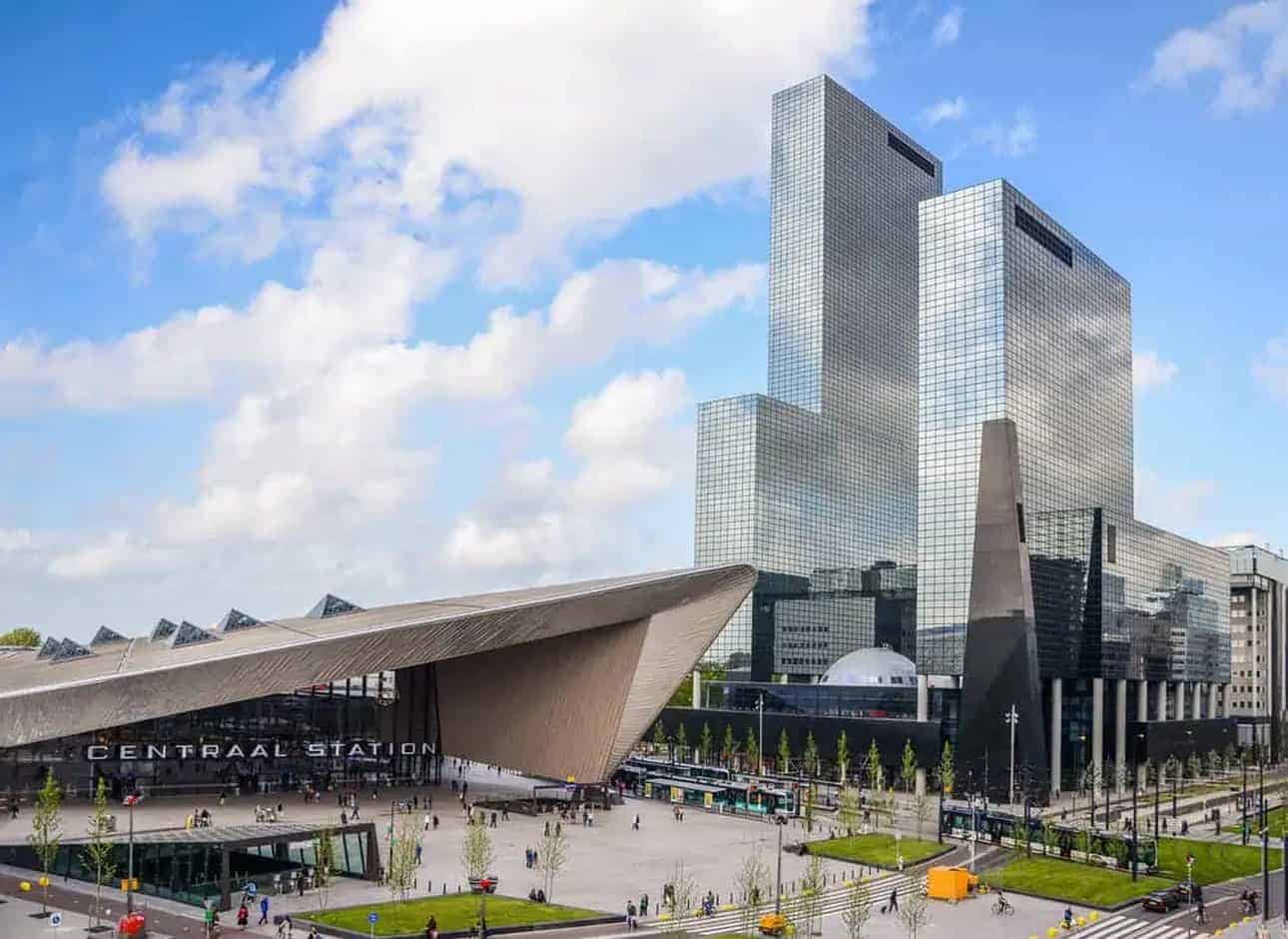 Rotterdam, Netherlands financial centre skyline, including the Central Station, which is an important transport hub with 110,000 passengers per day
If it's a sunny day, pay attention to the Nationale Nederlanden offices across from Rotterdam Centraal. The exterior of the buildings are highly reflective and as a result, the buildings often reflect the clouds and take on the exact same blue colour as the sky. The sunnier the weather, the more impressive and beautiful the effect. 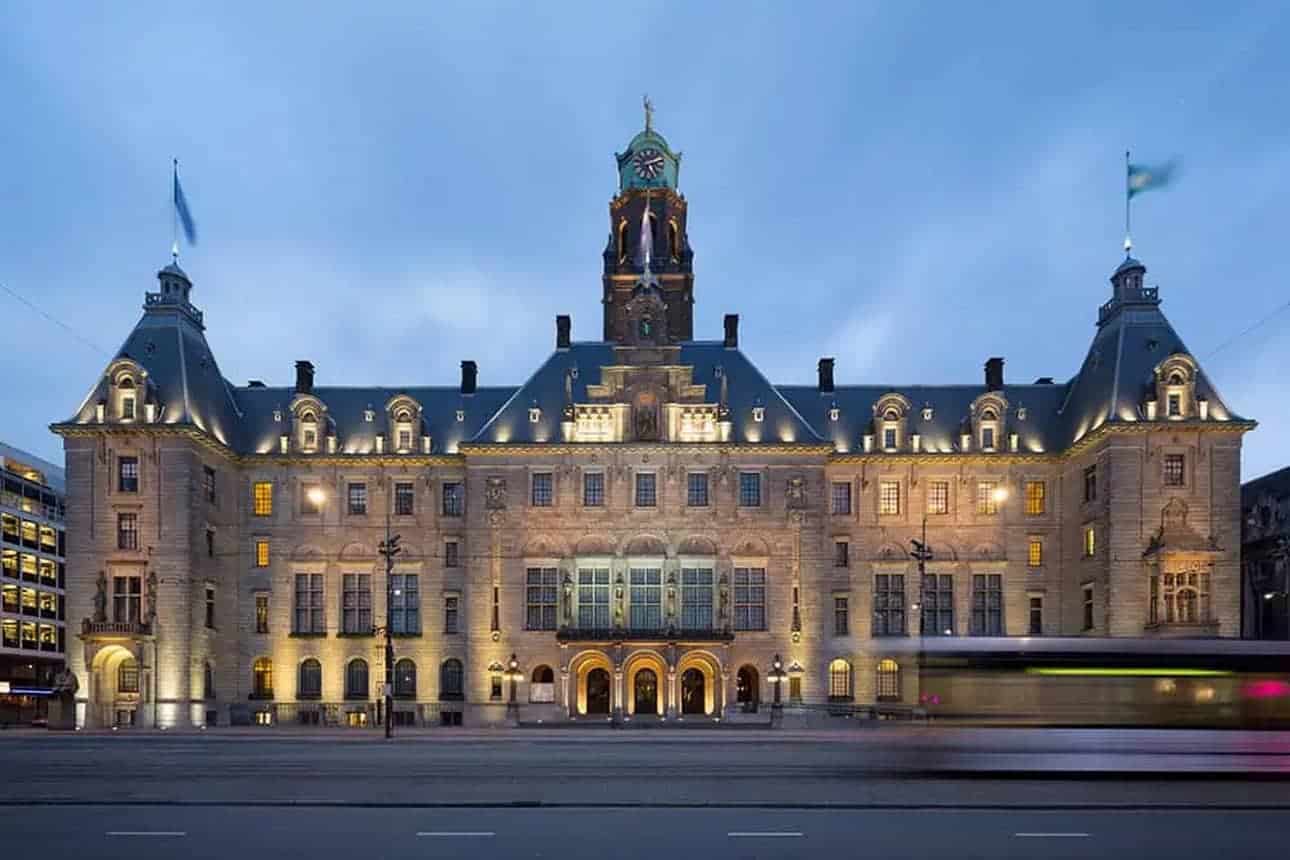 Stadhuis Rotterdam 📷 Ossip van Duivenbode
Stadhuis, the City Hall on Rotterdam's Coolsingel was built between 1914 and 1920 to a design by Henri Evers. It is one of the few buildings in the centre of Rotterdam that survived the bombardment of 14 May 1940. People who have never been to Rotterdam may hold the view that Rotterdam is not a 'classic' city and that it lacks 'old world' architecture. Well, show them Stadhuis, and they might change their minds. 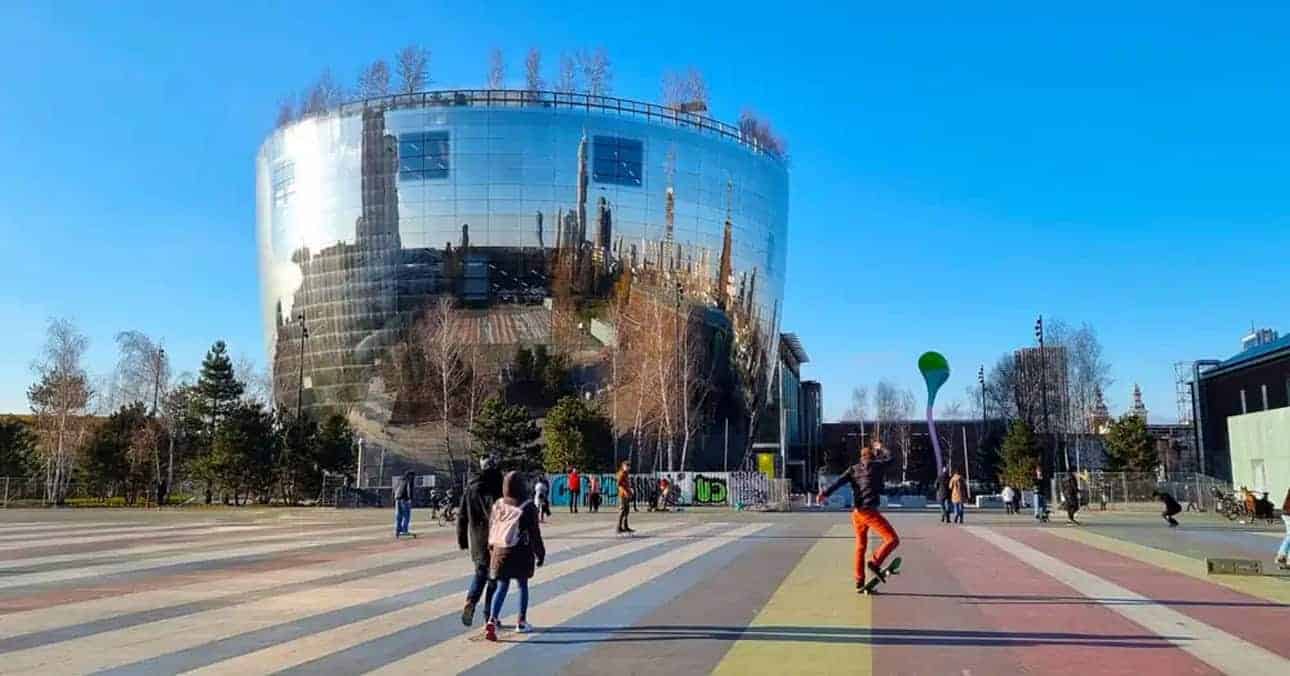 Depot Boijmans van Beuningen at Museumplein in Rotterdam
What's the point in having a huge collection of art, but keep it hidden in storage? As an answer to this question, the Boijmans van Beuningen museum in Rotterdam commissioned the construction of Het Depot, in order to always have their collection on display. The result is a stunningly beautiful reflective bowl, with trees growing on top. It's absolutely dazzling by day, and by night the surrounding area is sometimes illuminated by colourful spotlights or art installations. 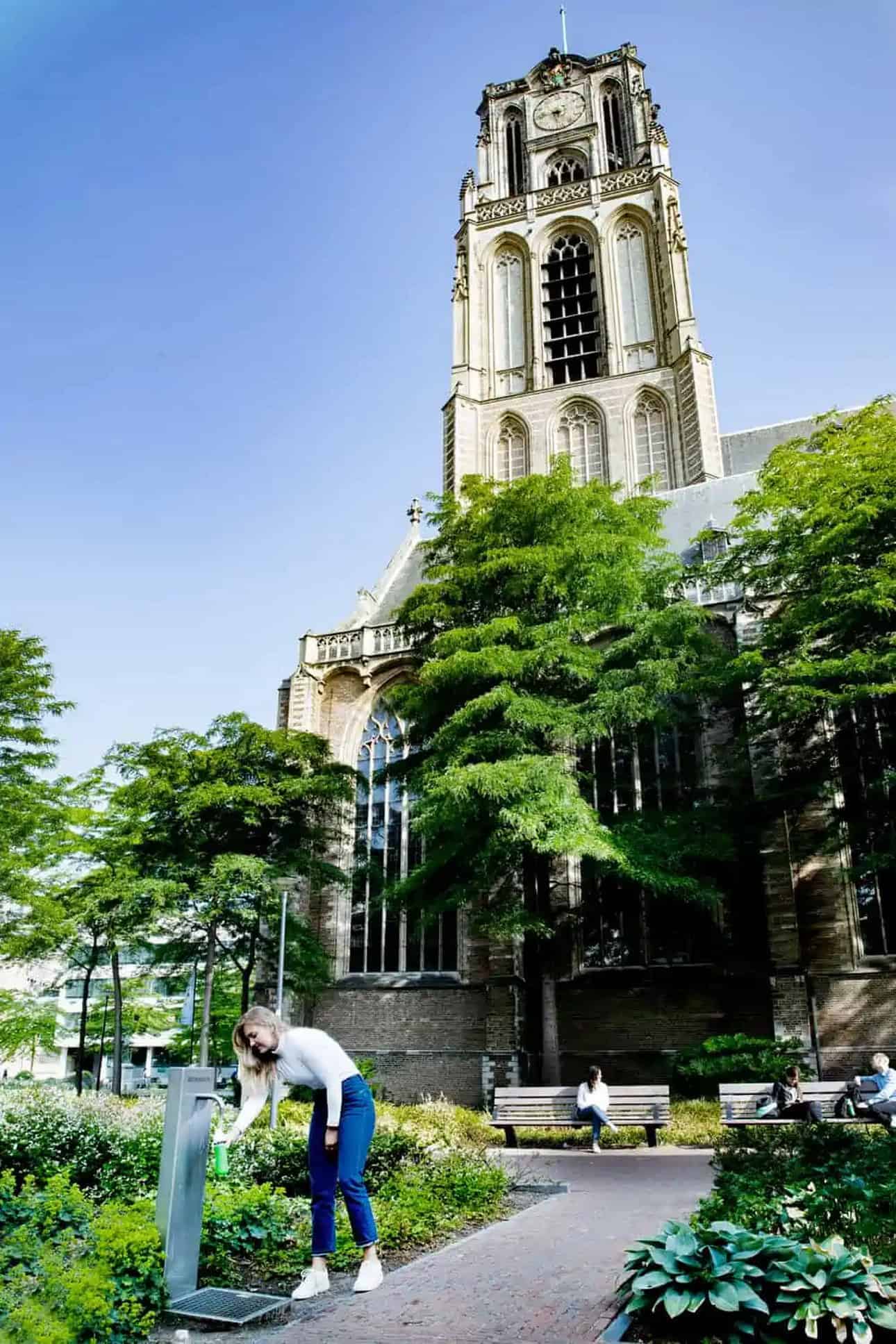 Laurenskerk Rotterdam 📷 Iris van den Broek
The St. Laurenskerk in Rotterdam (als known as Grote Kerk) is the only remaining medieval building in Rotterdam. Its construction began in 1449 and the church was first completed in 1525. At the time, it was the first building in Rotterdam that was fully built out of stone. Later on, the tower was added in 1621 and has since been reconstructed multiple times. During WWII, it was bombed by the Nazis in what is called the Rotterdam Blitz attack of 1945. After the smoke cleared, only the church's walls remained. Yet, restoration started in 1952 and by 1968 the building was restored to its former glory, with use of both original and new building materials. Tip: you're going to need a very wide lens to capture this in one shot, as the open space around the structure is quite limited. 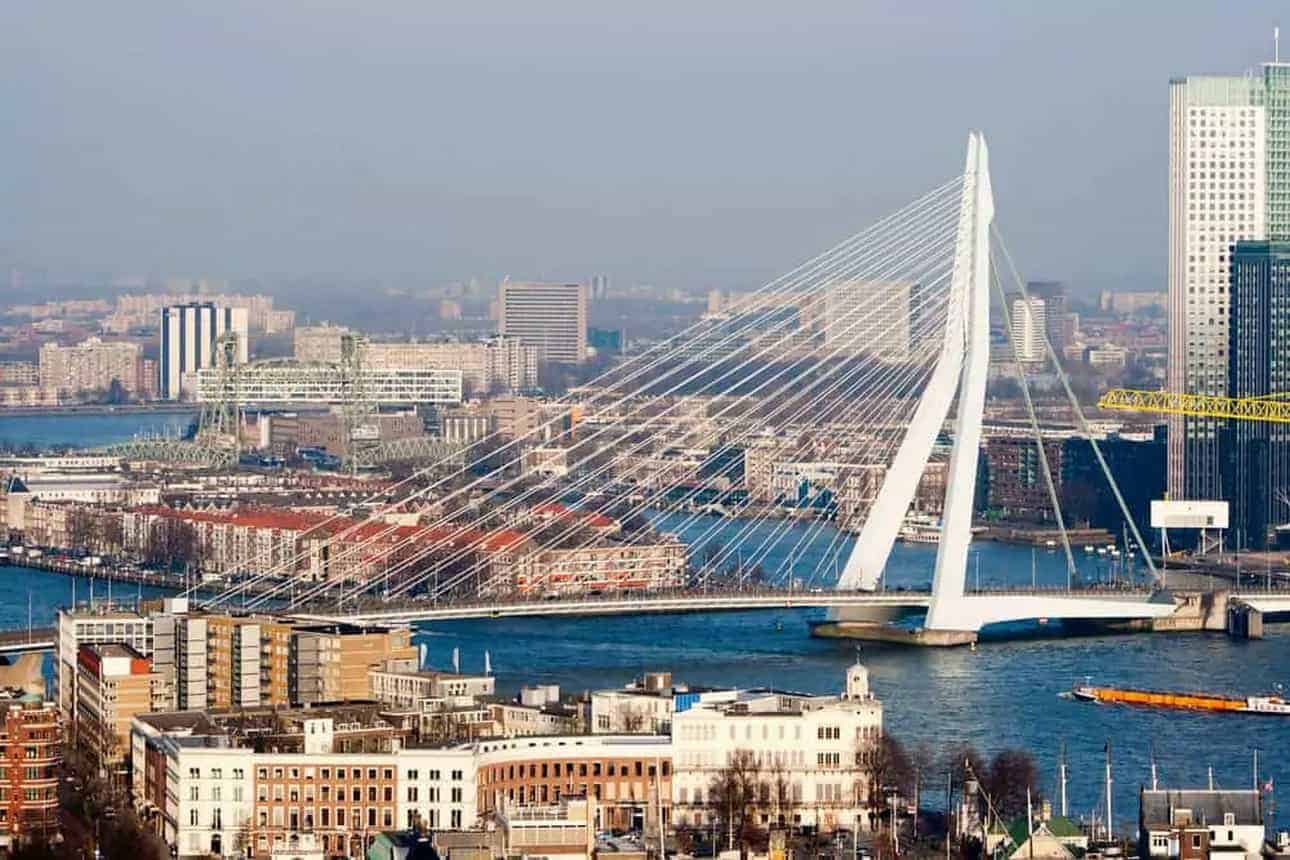 View the Euromast on Rotterdam city and the Erasmus bridge on a clear winter day.
Of the various beautiful bridges in Rotterdam, the Erasmusbrug is the most famous. Construction started in 1986 and the bridge was officially opened 10 years later in 1996 by Queen Beatrix. To get a nice photograph of the bridge, try approaching it either by boat, or from a high vantage point if possible. Otherwise, try from my favourite spot, the Willemsbrug, which is a bit further down the river. From the Willemsbrug you have a majestic view of the entire waterway, including the Erasmusbrug and the picturesque city skyline.

Erasmus Bridge (Erasmusbrug) and Rotterdam skyline illuminated at night. Rotterdam, Netherlands
Another idea (see above), is to get a shot of the Erasmus Bridge together with De Rotterdam in the background. This brutalist building, designed by Rem Koolhaas' Office for Metropolitan Architecture (OMA) is gigantic and hard to miss when trying to photograph the Erasmus Bridge. But in a sense, the sweet & sour contrast between the two objects is like a nice food pairing. De Rotterdam, designed as a 'vertical city', is the largest building in the Netherlands. 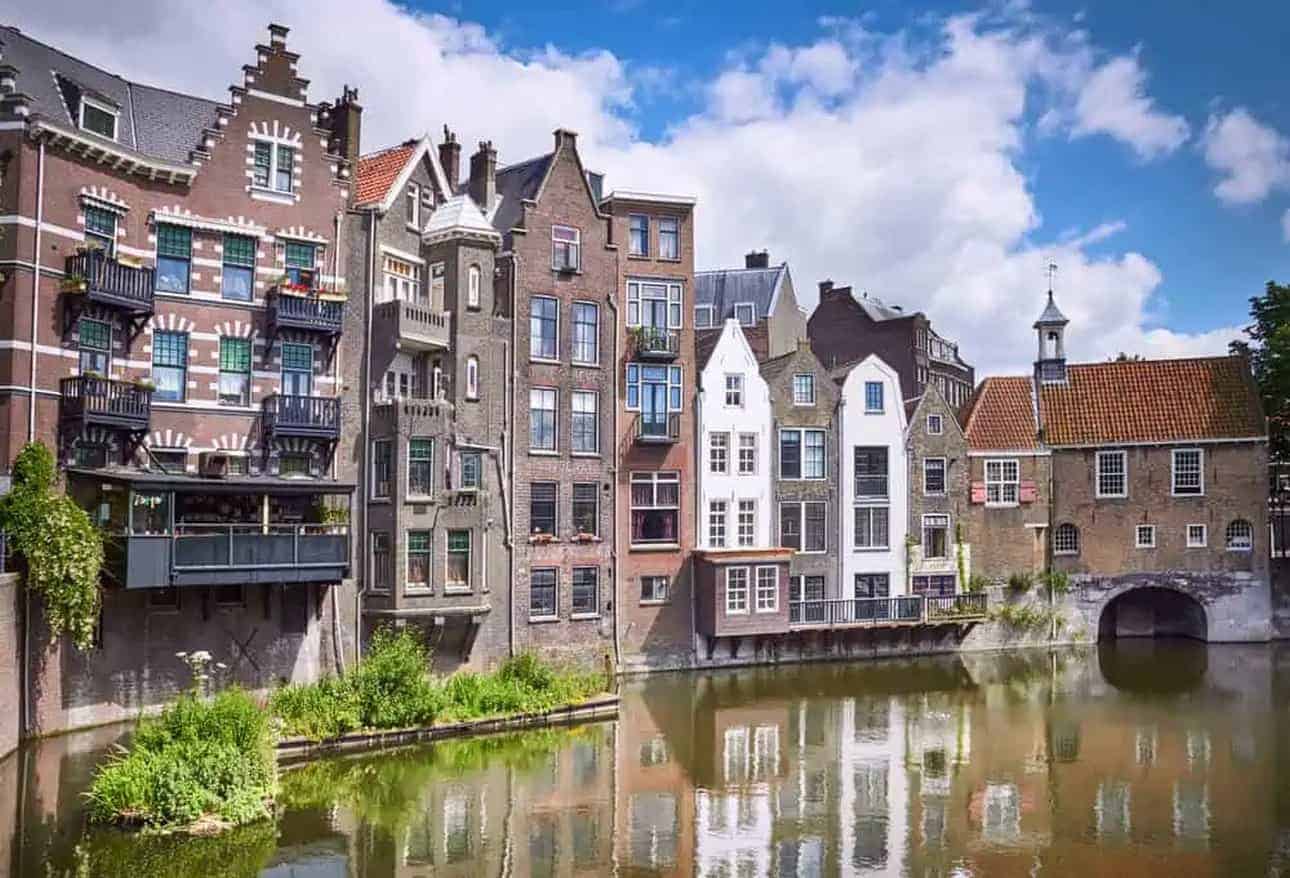 The Aelbrechtskolk area in historic Delfshaven
If you came to the Netherlands expecting old canals and found yourself in Rotterdam, don't sweat it. Head on over to Delfshaven, and you'll find exactly what you're looking for. This area is called the Aelbrechtskolk. This picturesque marina is one of the few pieces of old town that survived the bombing of Rotterdam in 1940. It has a striking history as the place from which the Pilgrim Fathers left for America and as the birthplace of Piet Hein. It was here at the Aelbrechtskolk that Delfshaven came into being in 1389: the seaport of Delft. The picturesque little harbour has survived wars and has always been left rather untouched. 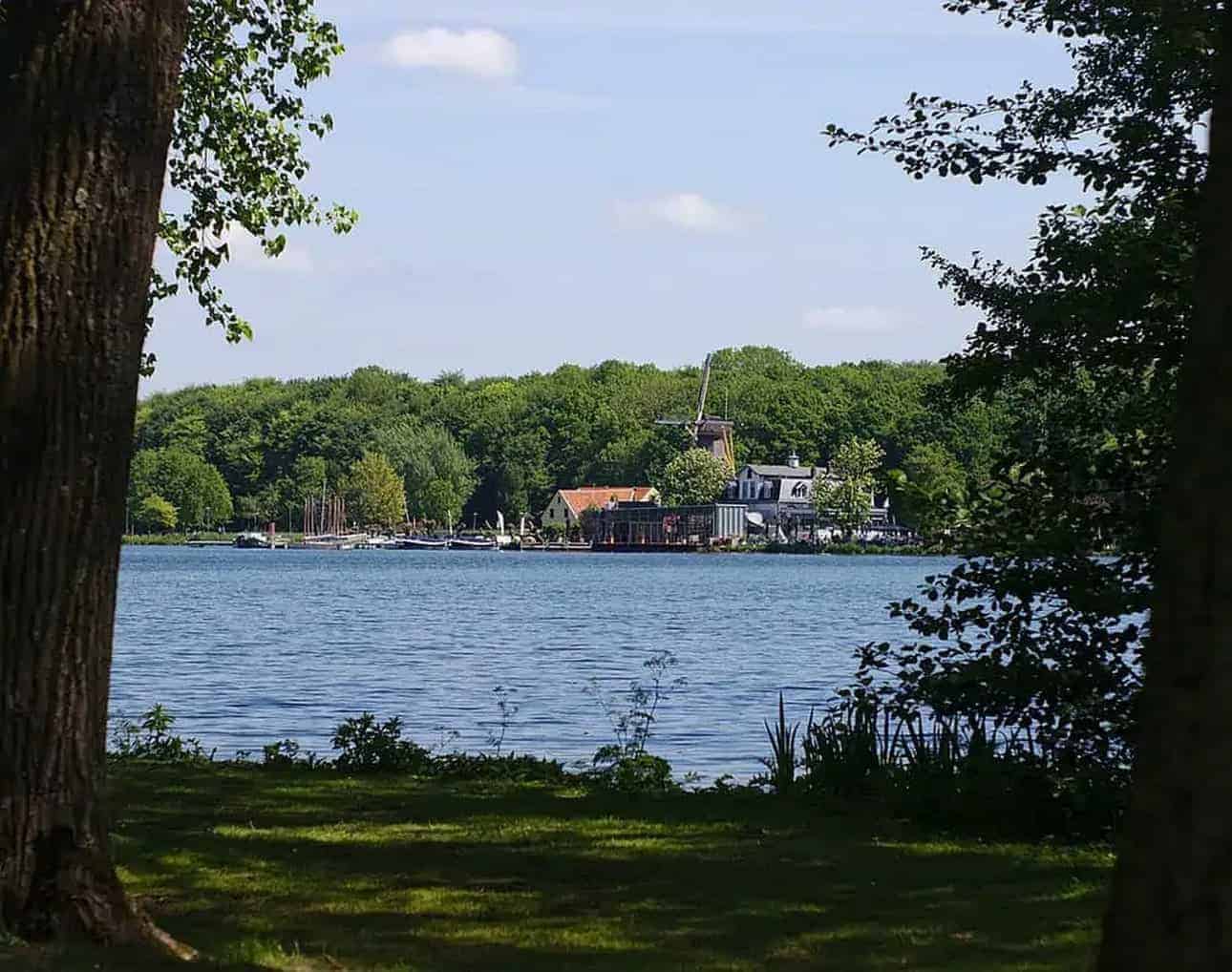 A view on the windmill "De Lelie" from one of the small islands in the Kralingse Plas 📷 Jchmrt
The Kralingse Bos / Kralings Plas area is a true oasis and of the most beautiful, relaxing locations in the city of Rotterdam. Here, you can venture out into the woods, sail across the lake, visit the windmills or admire the view of the city skyline. If you're into landscapes and nature, be sure to visit this spot. 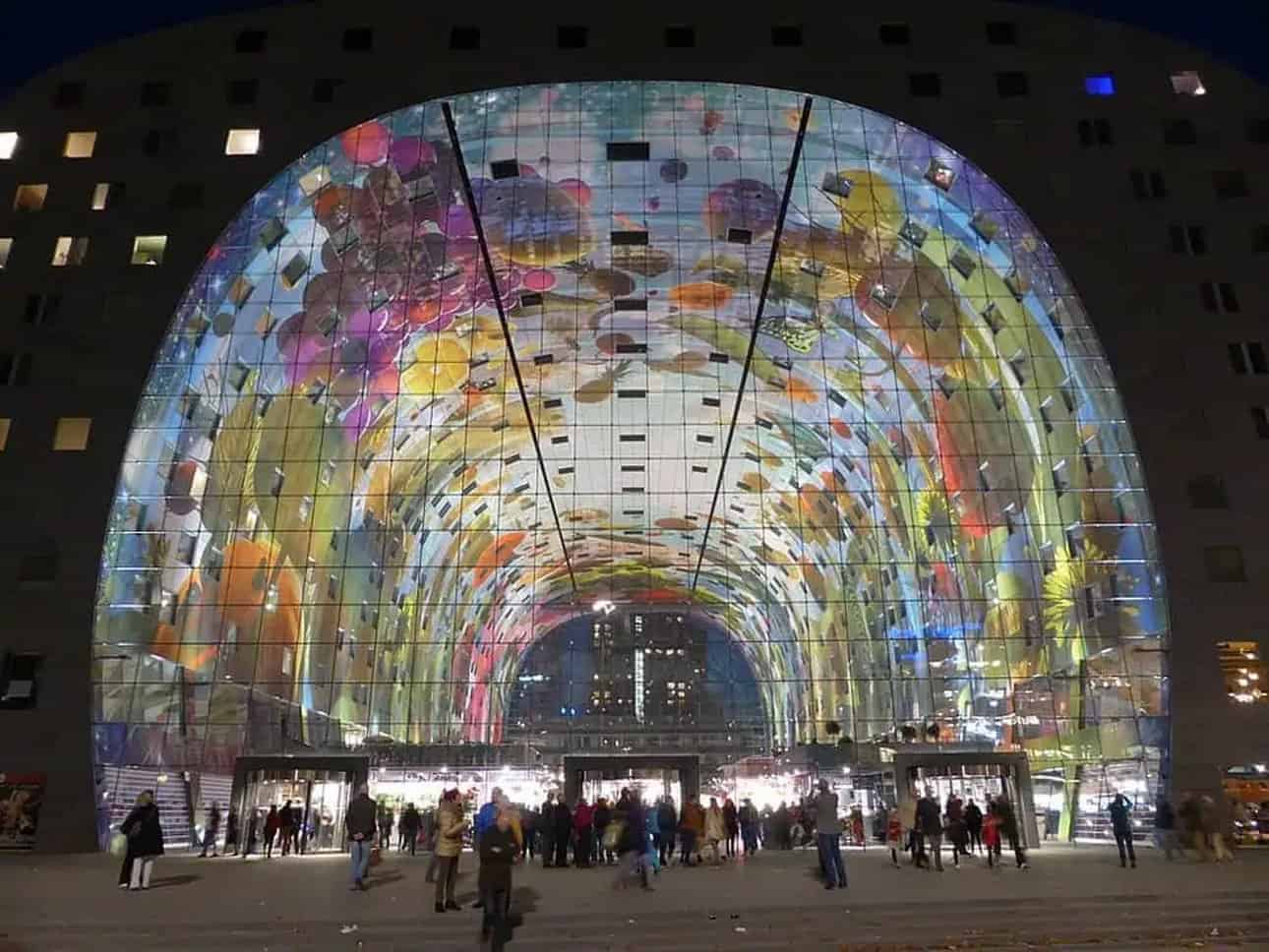 Markthal Rotterdam in the evening 📷 Paul Arps
From the outside it looks like a bread bin, from the inside it's a modern take on Michelangelo's famous works inside the Sistine Chapel. This building really shines at or after dusk, when the sun is hanging a bit low and the lights are turned on. If you photograph it from the back, you also get a nice view of the building known as 'The Pencil' (Potlood), which kinda cute. The famous Cube Houses in Rotterdam
The Cube Houses (Kubuswoningen) in Rotterdam are world-famous. It's also quite fun to get the best angle for your photographs. It can be a fun 'challenge' to look at photos online of the cube houses online and then try to recreate them yourself. You'll soon find out that (for some angles) it's not easy to figure out where the photographer was standing. The Cube Houses are located right across the Markthal and The Pencil. A view of Oude Haven, Willemsbrug and Witte Huis
Across the street from the Cube Houses you'll find a tiny harbour with traditional wooden ships and a small shipyard. From here you also have a beautiful view of the Witte Huis, the first skyscraper in Europe (42 metres tall) as well as the red Willemsbrug. Combine a photo session her with lunch at one of the many terraces that line the harbour. The actual harbour is called Oude Haven, though you might find it easier to get here by searching for Spaansekade.

Photography gear and tips in Rotterdam

If you're in Rotterdam and looking for a good camera, a new lens, photography equipment in general or tips, one good source for everything you need is Kamera Express

. The website is easy to navigate and offers just about anything you might need, but it's also nice that there's a local 'super store' located right here in Rotterdam.