Stadshaven Brouwerij is officially opened. From left to right: brewers Tobias Lückhof and Stijn Beurskens, director Harm van Deuren and sales and marketing director Alexander Bruring. 📷 Patrick van Katwijk
ROTTERDAM, 1 July 2020 - This morning the Stadshaven Brewery was officially opened. Six new Rotterdam craft beers were unveiled during the opening: the Fearless Fruit range with a hint of fruit and the classic beers from the Fearless Crew range.
From today, brewery guests can taste the beers and order a matching dish. The menu features honest and sustainable (local) products, and the kitchen staff use three different preparation techniques: the stone oven, smoker and BBQ. In the Gastropub, the in-house brewed craft beers, innovative beer and (fruit) food combinations and beer cocktails are served and the beers can be tapped at the self-service tap tables. Guided tours and beer tastings are also organised.
"I am very proud that today we can finally show our complete concept to the public. We have worked hard recently to come to this result and it is great to see that people are making plenty of reservations. The guests can experience the magic of the brewing process themselves during the brewery tour and then drink the beers and tap them themselves for an optimal experience. The beer in our brewery comes straight from the kettles and is therefore super fresh. The catering section is a real eye-catcher where we hope many people will enjoy our various food combinations. With Stadshaven Brouwerij, we have created a unique setting for the Netherlands around beer and today my dream has come true. Because something like Stadshaven Brouwerij is something I have only seen abroad. Harm van Deuren, initiator and director of the Stadshavens Brouwerij, says: "From now on, it will be in Rotterdam too."

Stadshaven Brouwerij is an extensive craft beer brewery, of which there are only a few in the Netherlands. With brew kettles of 4,000 litres and storage tanks of up to 12,000 litres, no less than 2 million litres of beer can be brewed per year. In terms of capacity, this places the Stadshaven brewery directly in the top 3 of the largest craft beer breweries in the Netherlands. The beers are inspired by the location of Stadshaven Brouwerij, in a 100 year old fruit warehouse, and the history of Rotterdam Fruit Port, once Europe's largest fruit port. 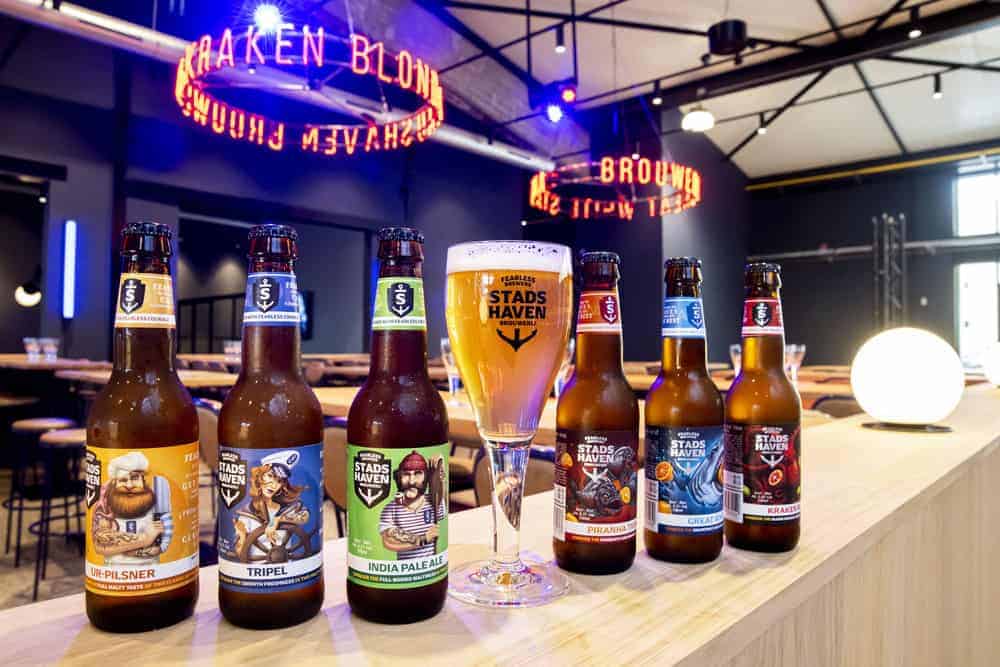 Fearless Crew and Fearless Fruit beers 📷 Patrick van Katwijk
Over the past few months, the brewing team has developed three Fearless Fruit beers: the Kraken Blond with kiwi berry and blood orange, the Great White with grapefruit and orange and the Piranha Tripel with kumquat and mango. The design of the beers is characterised by the adventures that take place under water, which one will taste through the exotic fruit combinations. In addition, three classic Fearless Crew beers are brewed: the Pilsner, the India Pale Ale and the Tripel. All beers are bottled, canned and cask conditioned and can now be enjoyed at the brewery itself as well as at other food service establishments throughout the Netherlands. The beers are also available for sale in the Stadshaven Brouwerij shop. 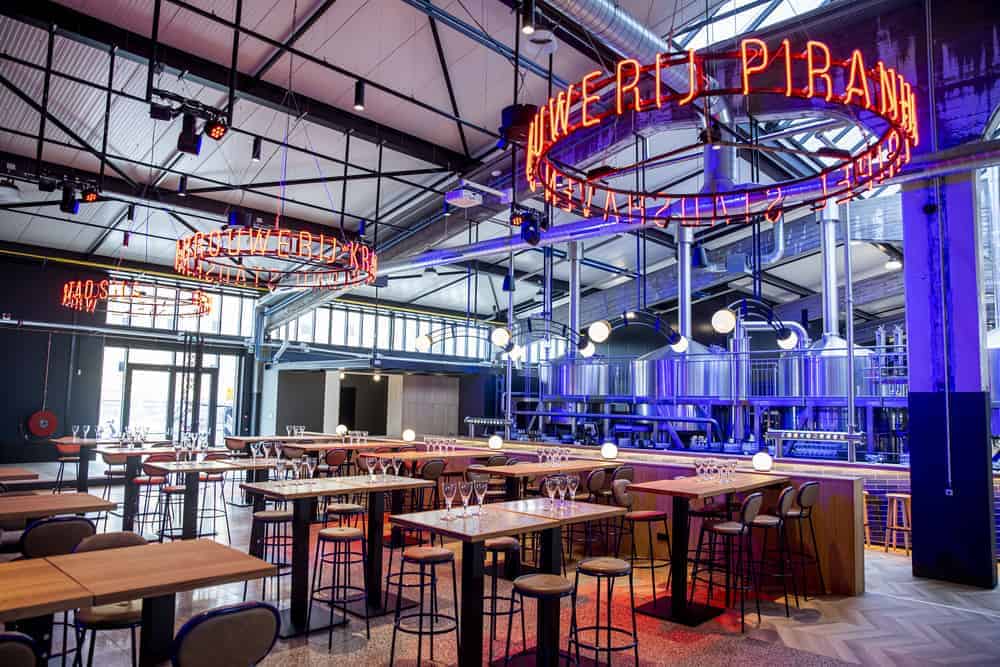 A place to come together

The arrival of the Stadshaven brewery in the redeveloped Rotterdam Makers District contributes to the liveability, circular economy and social dynamics of the area. The Gastropub and the terrace will have room for a total of 650 guests. In the catering section, people can taste the beers brewed a few metres away and order hearty dishes. In Stadshaven Brouwerij's own words, this is a place 'where people come together and where meat and fish lovers as well as vegans get their money's worth.' The Gastropub is divided into four spaces that reflect the themes of the Fearless adventures. At the entrance, there is 'The Kraken Pub', where guests can sample the brews at the bar. There are also five 'Brew Tables' where guests can play bartender. After dinner, at 22:00, the space is transformed into 'The club' where live music is played and people can dance while enjoying a beer cocktail. 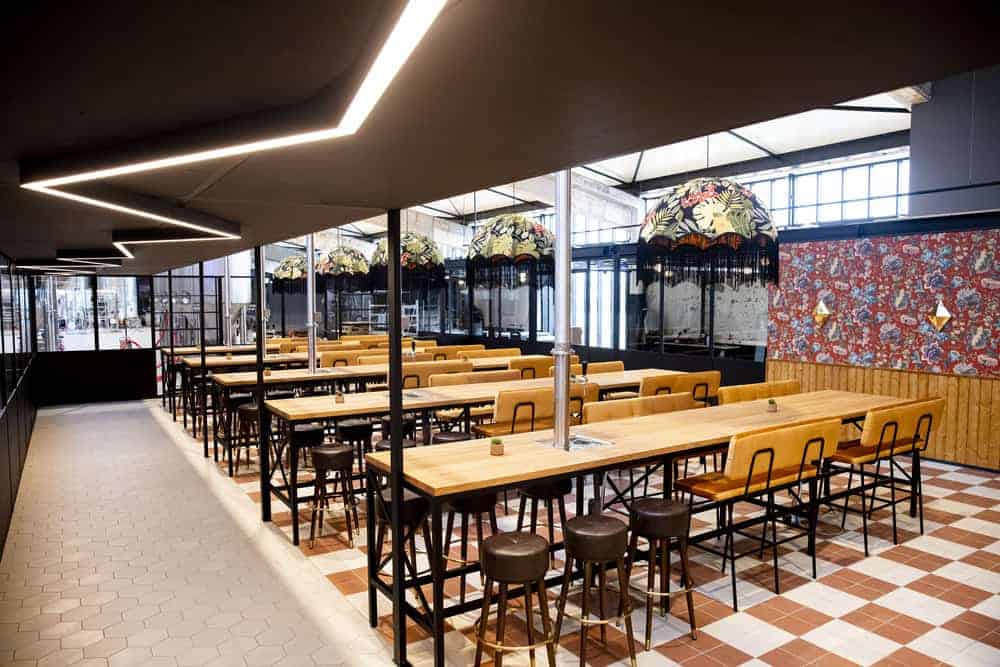 Working in a circular way and wasting as little as possible

Circularity and sustainability are also on the agenda. There are no less than 1,700 solar panels on the roof. The Stadshaven Brewery is also working together with Rainmaker, an innovative company in the field of water making, which will collect and purify the waste water so that it can be reused as brewing water. The residual waste from the brewing process, the brewers' dregs, are also put to good use. It is donated to the cows of the famous Floating Farm, the world's first floating dairy farm located less than 200 metres from the brewery. Because the cows eat the beer malt, they produce 2.5 litres more milk per day. The brewery then uses the milk again in the catering area to make cappuccinos, for example.