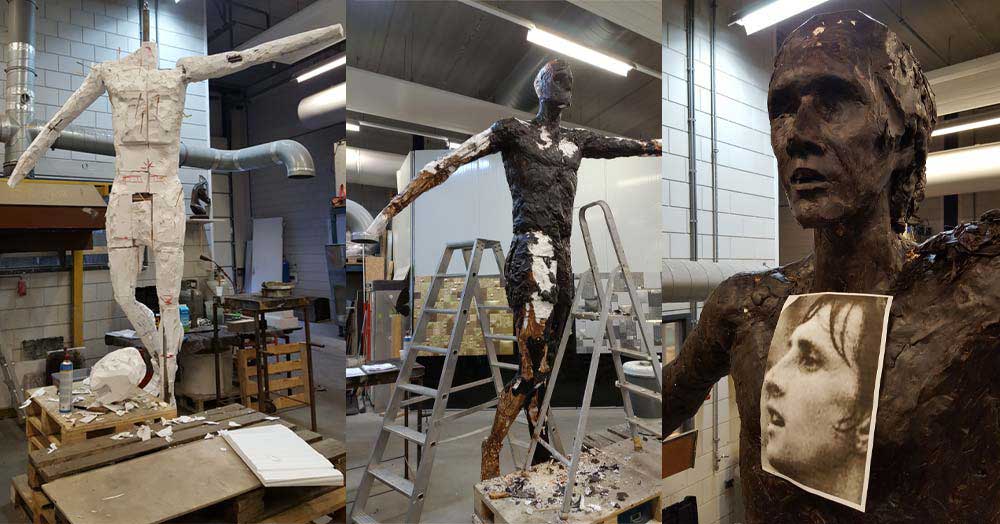 Rotterdam artist creates timeless statue of Johan Cruijff
ROTTERDAM/BARCELONA – The statue of Johan Cruijff, revealed at Camp Nou, Barcelona on the 26th of August, is a production of art studio Artihove from Bergschenhoek (Rotterdam), the Netherlands. The sculpture has been designed by Corry Ammerlaan- Van Niekerk at Artihove.

The 2.55-metre high statue, standing on a 1.40-metre tall pedestal was revealed at the entrance of Camp Nou, the stadium of F.C. Barcelona on Monday evening. The sculpture is said to show Cruijff setting out the strategy for playing. “Focussing on the human side, the sculpture gains its timeless appearance”, says the artist.

One of the guests at the festivity on occasion of the unveiling was the Dutch artist Corry Ammerlaan- Van Niekerk, who designed the sculpture on behalf of Artihove. The order was to show an image of Cruijff in the period (1973-1978) he was playing for the Spanish top-club. That is why he is wearing his old Barcelona shirt and also his hairdo is a tribute to the “roaring seventies.” Cruijff's wavy hair was the fashion of that time and moreover expresses his flamboyant personality, explains the artist, who met Cruijff several times.

Special attention has been given to Cruijff's  “slim body and very muscular legs”,  but the most important thing was to create a timeless image. Corry Ammerlaan-Van Niekerk has achieved this by working with a choice of sustainable materials and by emphasising the “human side” of the football player.

Jelle van Dijk, director of Artihove,  says to be very proud of being selected for this prestigious project. Over the years his firm made statues of Pim Fortuyn, Kim Clijsters and Bep van Klaveren. “But this order is extra special because it's only about the person Johan Cruijff,  the huge size of the object, the commissioner and of course the location.

Carole Thate, General Manager of World of Johan Cruijff, is very pleased with the sculpture. “There exists an incredible number of memories of Johan Cruijff, and with this statue, Corry Ammerlaan-Van Niekerk has tried to portray him as well as possible. The famous posture of Cruijff, pointing and guiding, has been chosen. This was widely known from his time as a player and trainer but later also from the establishment of his Institute and Foundation. We are very proud that it takes such a prominent place at FC Barcelona”.

Corry Ammerlaan-van Niekerk welcomes the positive response, but she is especially curious about the judgement of the public. “During the football season, hundreds of thousands of supporters walk past the statue. I think that is very special. I especially hope that the public appreciates this tribute and that justice will be done to the major impact that Cruijff has had, both in Barcelona and worldwide”.

Art Studio Artihove at Bergschenhoek (near Rotterdam) is specialized in the manufacture of creative and artistic gifts in different materials. The Dutch Company has a rich history, which goes back to the year 1898 and has immortalized a great many very prominent people by sculptures. The company, with a sculpture garden of 30,000 square meters and a gallery, has since then grown into a substantial organization with important customers, both at home and abroad, among which are Unilever, Red Bull, DAF and Shell. There is more information to be found on the Artihove website.