Behind the bacchanal: Exclusive interview with Rossini van Wijk Despite Rossini's busy schedule, we got him to sit down with us and open up about his work. Read on, for a unique behind the scenes perspective of Rotterdam's Summer Carnival street parade.

What's your role, as group leader?

As the group leader, I'm responsible for getting the group on the road on the day of the parade. Not only will I guide the group on this day, but I will also be the spokesperson before, during and after the parade. I am the main contact for the Summer Carnival staff organisation. As such, I keep in close contact with them concerning everything from floats, music, participants, queens to road-pieces, transports, safety, and necessities on the day of the parade (like ice, fire extinguishers, generators, music trucks etc).

Your journey started earlier though...

When did you decide to start designing costumes?

I started designing costumes for queens, individuals, sections and groups back in 1987. Many of my designs have won prizes, nationally and internationally. Here in the Netherlands, I started Kingdoms Under The Sun in 1998. We won Group of the Year. However, I moved back to Aruba afterwards and stayed there for a few years, so it wasn't until 2003 that I returned to The Netherlands and officially launched my own group.

How does your process look like? When do you start preparing, and when is your work complete?

I always have the themes and queens lined up. I Already have a theme for 2017, with a queen, as well as a theme and a queen for 2018. So I'm already looking for materials, fabrics, colors and such. I have also lined up the Individuals already and have the idea for the float for 2017. I'm now harvesting ideas for the costumes of the floor members and the shoulder- and headpieces. So its a process which never ends [laughs] so the work of the concerning year is finished when the music starts and the truck starts to ride.... Until then, you're not finished 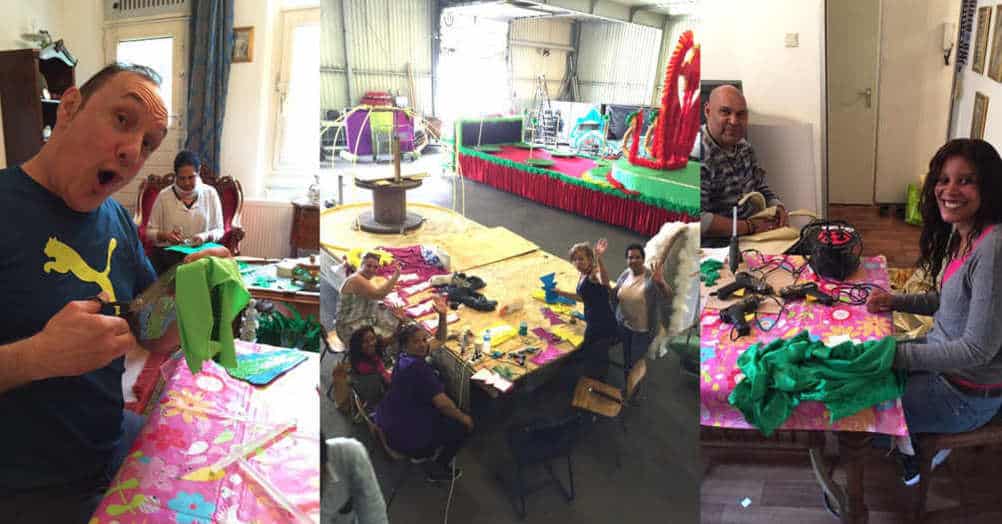 Mass Camp Kingdoms Under The Sun 2016

This year's theme is Court of Montezuma. How did you come up with this theme? Where did you find the inspiration and how did you translate your ideas into designs?

Well, this years' theme The Court of Montezuma is inspired by an old Esso Club theme "The Kingdom of Montezuma" from the early 1980's. It is a tribute to Esso Club, one of the great groups of the past, for all its years of dedication and participation in Aruba's Carnival. The designs are completely different, as is everything else, but it's a tribute from the heart nonetheless. 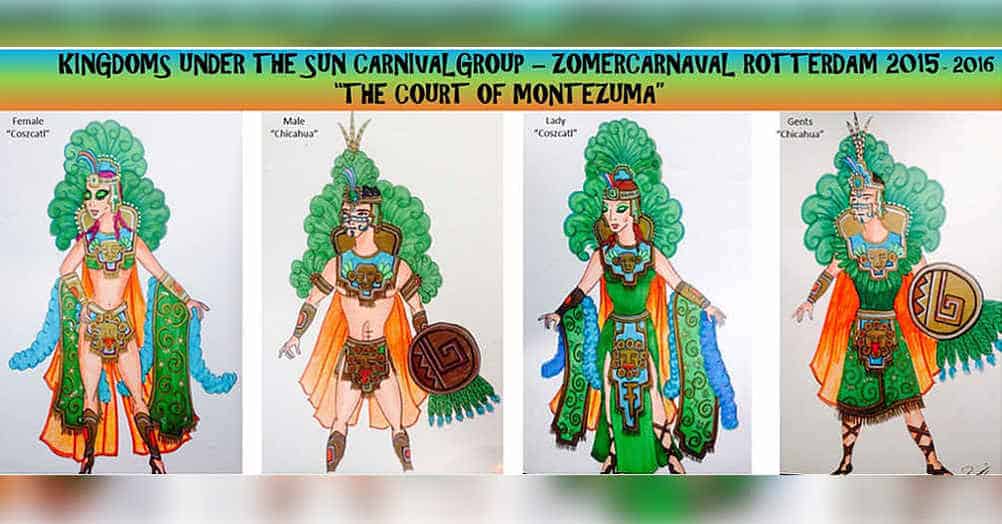 Original designs by Rossini van Wijk; The Court of Montezuma

How has the street parade evolved over the years, and how do you feel about it?

Carnival has not evolved that much here in The Netherlands. It's pretty much constant. The only thing that has changed is the range of nationalities in the groups. Nowadays, there's a lot more diversity. Each group is pretty much a mirror of today's everyday society. All nationalities are blending together more and more.

For a few years now, we have not had groups of real Brazilian origin, like Beija Flor and Brazil Aché, which is a pity. Another development is that there are more groups playing soca. Thanks to DSL (Dutch Soca Lovers) the International soca scene has hit zomercarnaval. Where there were only Trinidad Connection and Kingdoms Under The Sun, now you have groups like Blends, Caribbean Love, SIU (Small island Unity) and more, playing soca music. Even the Curaçao groups, which traditionally only played tumba, now also play 'road fire', their own version of soca. I think this is great, because you have more interaction between the groups.

Any tips for first-timers coming to the street parade?

If you're coming to see the parade, come early and stand at the beginning. Everybody is still "fresh". Also the spectators. At the end, or past the middle, the people tend to get rowdy, agressive or jump between the groups on the road to pull and dance. Especially if they have been drinking from early on.

As for the participants: drink plenty of water and wear comfortable shoes!! Especially ladies, wear shoes with a little heel. The Rotterdam roads are inlaid with bricks and pebbles, so if you're wearing flats, your ankles and the soles of your feet will be shot!!! Felis Carnaval!!!