The weird nicknames of Rotterdam's iconic buildings
Rotterdammers love their city, in all its architectural drama. So, when things get named top-down, Rotterdammers tend to name them back: bottom-up. What do those names mean? We will tell you!
The city of Rotterdam is renowned for its architecture. Mainly because after the Second World War Rotterdam decided to change its perception, its look so to say. Modernity was the direction of choice. As most buildings begin their existence on the drawing board, having people in offices think about all the necessary things, they also have the tendency to get named by those same people. A project name, often with affection, with meaning. But often, in Rotterdam, the people who must live with the architecture think differently of it and just as affectionately give them another name.
Oh, and to be fair: it is a Dutch thing to rename their buildings. Rotterdammers are not the only Dutch people who do it, but they do have most modern buildings and thus a much better starting point for coming up with new and inventive names.
Gain your insights here (in alphabetical order): 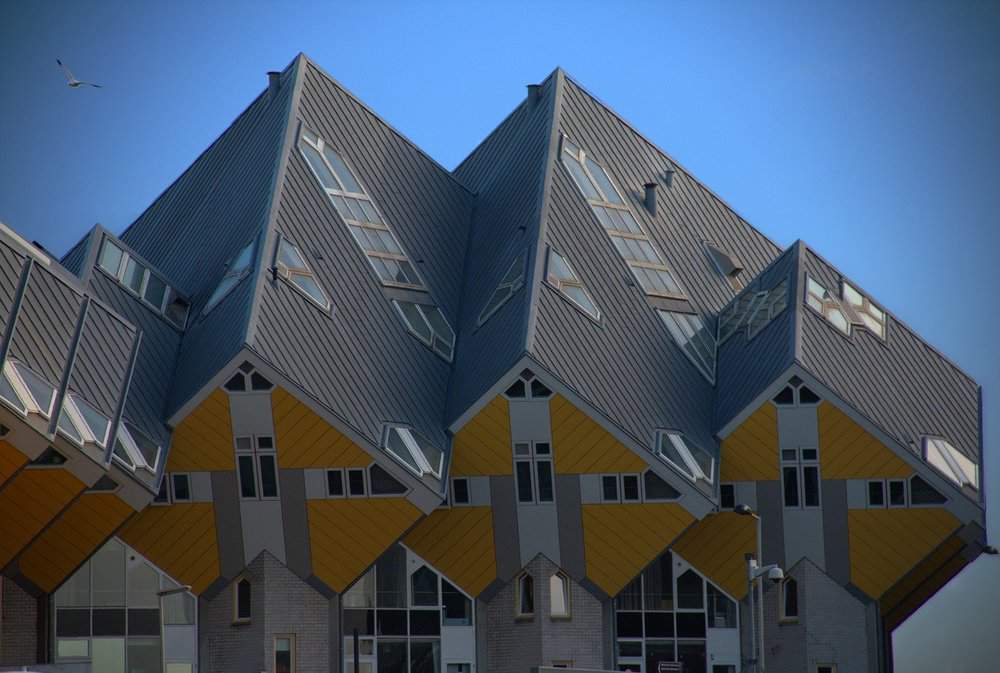 Designed by architect Piet Blom and finished in 1984, these peculiar cube houses were planned as a village in the city. The cubes are turned to stand on an edge and rest on a pole, making them look like a tree or treehouse. And, of course, several trees become a forest, hence the name “Blaak forest”. All houses stand on a space which is spanning the busy Blaak street so that there are no cars driving on the ground floor from which to enter the houses. This place is often used for communal and outside activities, seeing that the houses have no outside spaces themselves. 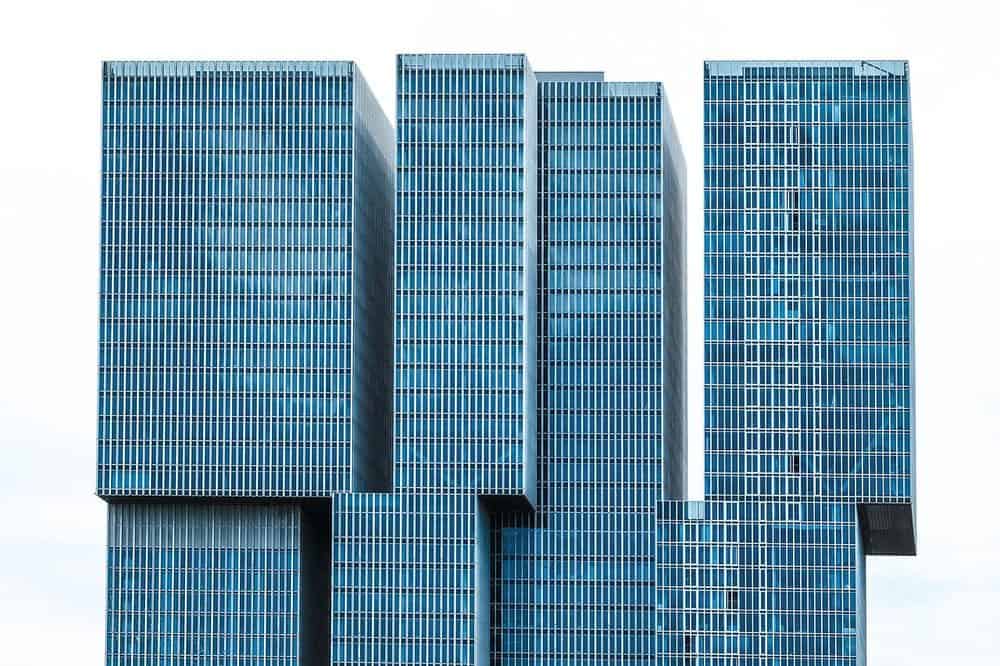 The “Office for Metropolitan Architecture” of Remko Koolhaas created the Rotterdam. The building was finished in 2013 and is located on the Wilheminapier. It is overlooking the Maas with a great view of Rotterdam’s inner city and skyline. Inside its 44 floors, there is space for the municipality of Rotterdam, a hotel, offices, parking spaces and many, many apartments. There is space for cafes, restaurants, fitness, and shops. It is one of the biggest buildings in the Netherlands. Its various uses are structured into “blocks” within the building. 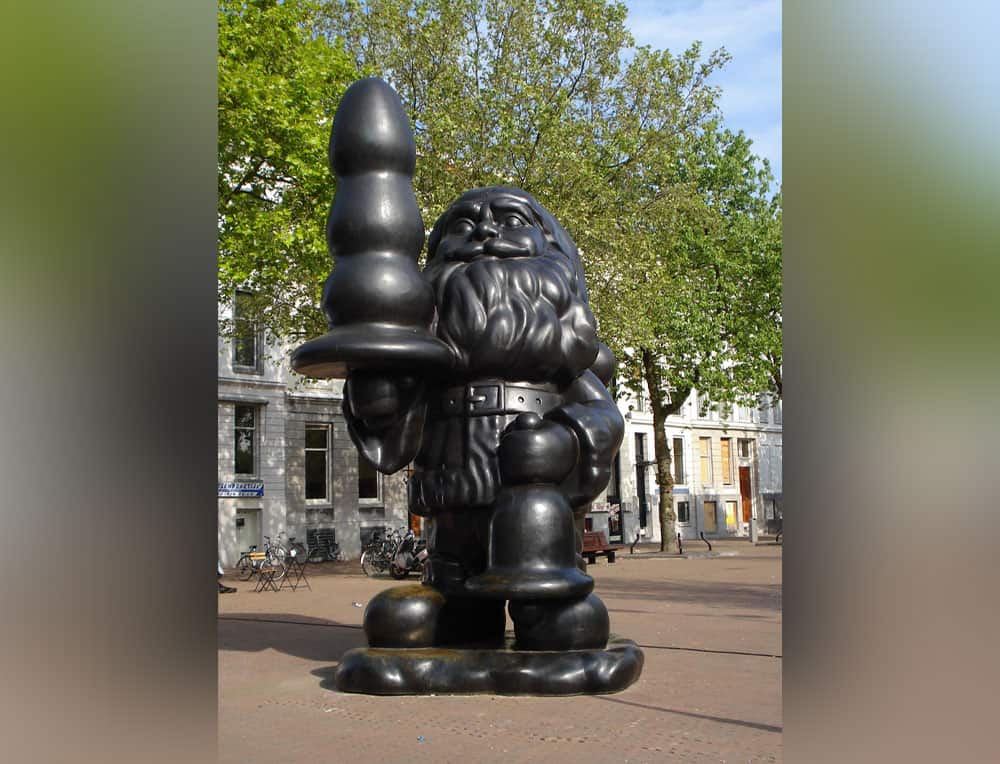 A large statue by artist Paul McCarthy, depicting a Santa Claus with a tree, is living on Eendrachtsplein – a square at the beginning of the inner city. The statue had been placed in several more central spots, but shopkeepers and inhabitants protested as it was implied by the artists to have a sexual connotation and meant as a commentary of consumerism in the Western world. Now, who would want that in front of their family-run business?

Station Beurs was one of the four original stations that were dotted around Rotterdam, all specified in their different directions the trains would take from them. However, the Beurs building itself and the station Beurs building were demolished in the Second World War. As the viaduct covering the river Blaak was still intact, the station was rebuilt. Because the Beurs (Stockmarket) building was relocated further towards the city centre, the station was named after the closer Blaak street (covering the former Blaak river).  In 1982 an underground metro station was added and after that the train station moved also underground - opened in autumn 1993. Because most of the station was thus underground an entrance building was placed on top of it, making it easier to find metro and train. This distinct building soon got several nicknames from the people such as “whistling kettle”, “pedal bin” and “manhole cover”.

The main library is one of the biggest ones in the Netherlands and the most visited cultural institution of Rotterdam. It has more than 400,000 books, one of the biggest record libraries in Europe and the biggest collection of Erasmus’ works. The library building itself sparks much controversy and nicknames. Built-in 1977 and designed by Rotterdam architect and professor at Delft University Jaap Bakema. The design was said to be “open, inviting, centrally located and accessible to everyone” and therefore ticking all the boxes as to how a library should be.
The building is an industrial-looking cube, with what looks like a snipped-off corner. A glass "waterfall" contains the network of escalators connecting its six floors. The descending levels have an open setting. The most remarkable element – the one that is invoking all the nicknames - is the air-conditioning system. Its angular tubes are on the outside of the building and are painted yellow. Some people say it reminds them of the Centre Pompidou in Paris, others accuse it of imitating said building. 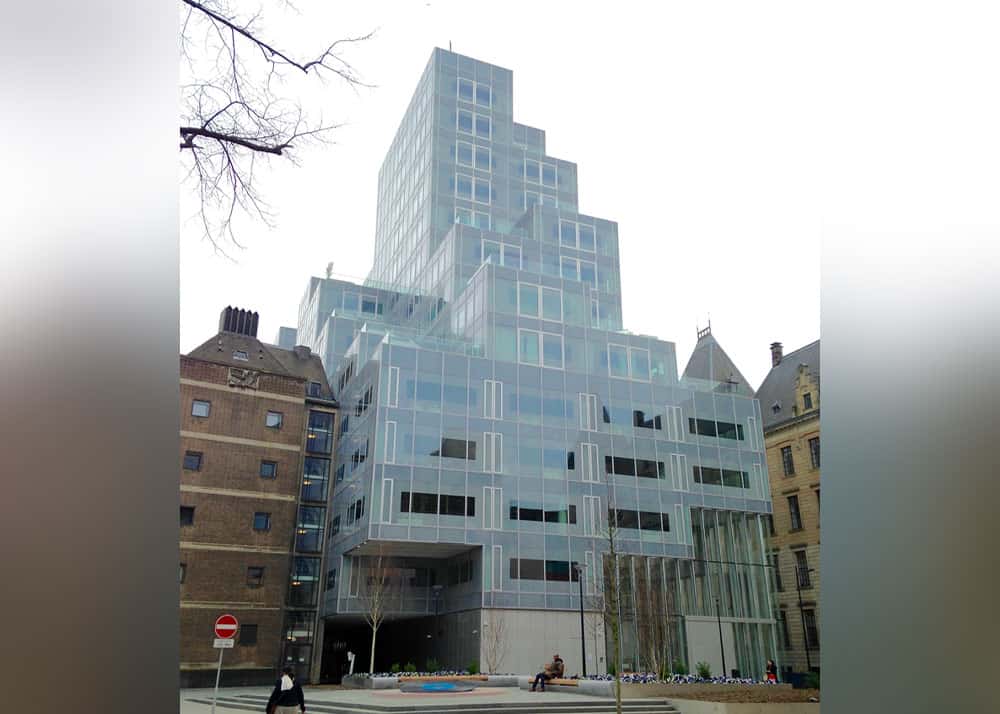 Rem Koolhaas and his architecture agency OMA are the creators of this interesting building too. The outside of the Timmerhuis is mainly glass complex at the Meent, in the city centre. Part of it contains an old building from the fifties in which the Rotterdam Museum, a dynamic and modern city museum, is housed. 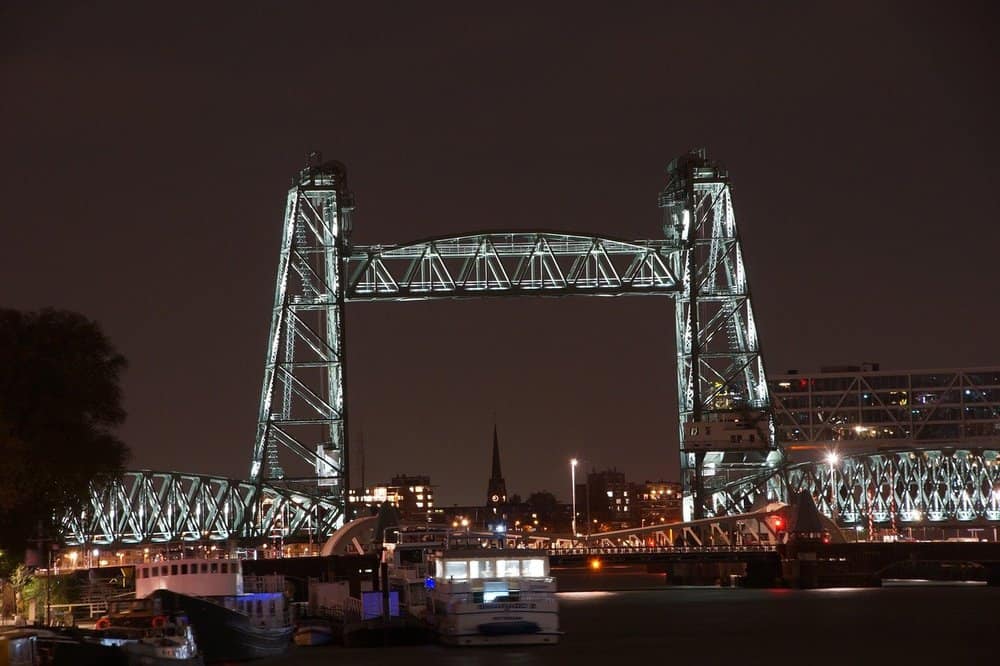 Permanently raised since 1993, this old train bridge is now one of the landmarks of Rotterdam. It is spanning the Koningshaven next to the Maas and used to be part of the train connection between Rotterdam and Breda. Opened in 1927 and famous by being the first of its kind in Western Europe and one year later through the Avantgarde film “The Bridge” by Joris Ivens. 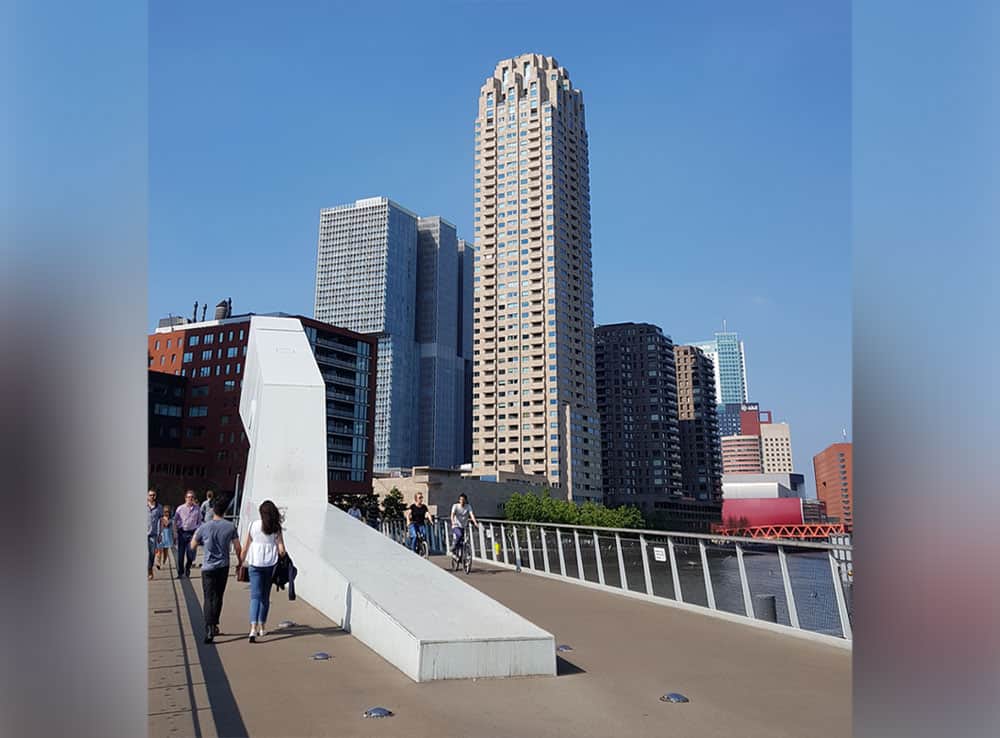 The bridge for pedestrians and cyclists crosses the waters of the Rijnhaven between Hotel New York on Willeminapier and Katendrecht. It was opened in 2012, has an elegant look and can be partly opened for ships. The name stems from the time when Katendrecht used to be the place the sailors left the ships and went to visit the “whores” living in the area for that purpose. 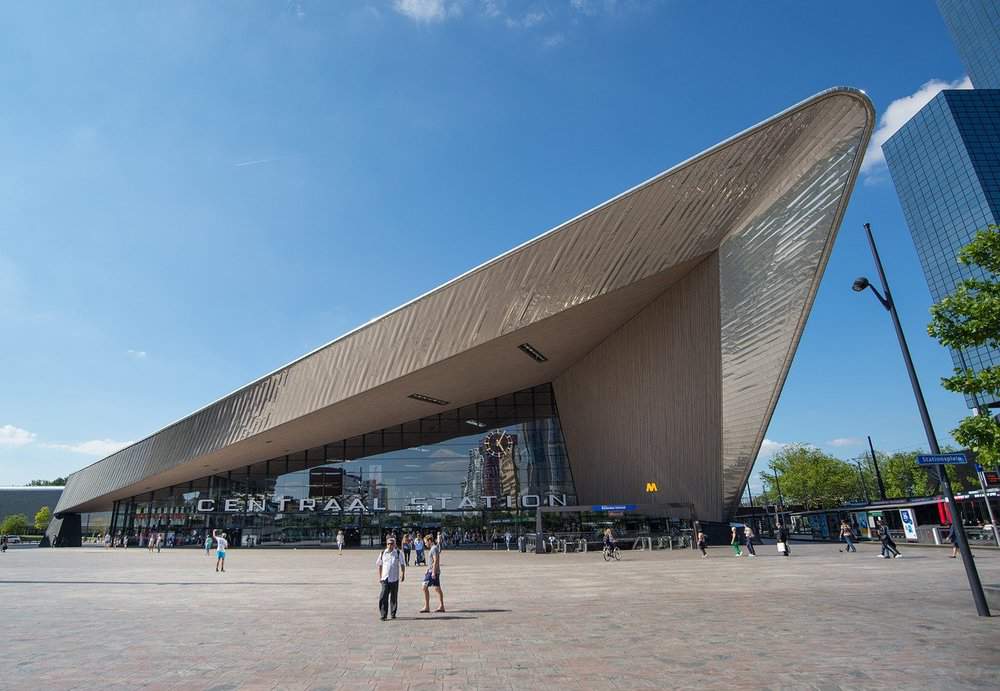 The Kapsalonbak – the central station

The Kapsalonbak – the central station

‘Station Kapsalon', is named after the notorious Rotterdam snack with kebab, chips, and melted cheese in a tin foil box. Rotterdam used to have four train stations, depending on where you wanted to go instead of “the central station”. In 1957, Rotterdam CS (Central Station) designed by Sybold van Ravenstyn, was opened and one after another the other stations where closed (there are still three train stations left within the city). But as it happens when cities grow and its people travel more, the first Central Station was not modern and not big enough anymore and has recently been replaced by Station Rotterdam Centraal, ceremoniously opened in spring 2014 by King Willem Alexander. The letters and clock of the old main stations are still decorating the face of this new building. A big, white, and rectangle building that looks like it could well emit coolness. That is why the building of Rotterdam’s biggest hospital, as a matter of fact, the biggest one in the Netherlands (after expansion in 2018), has the nickname: the fridge. 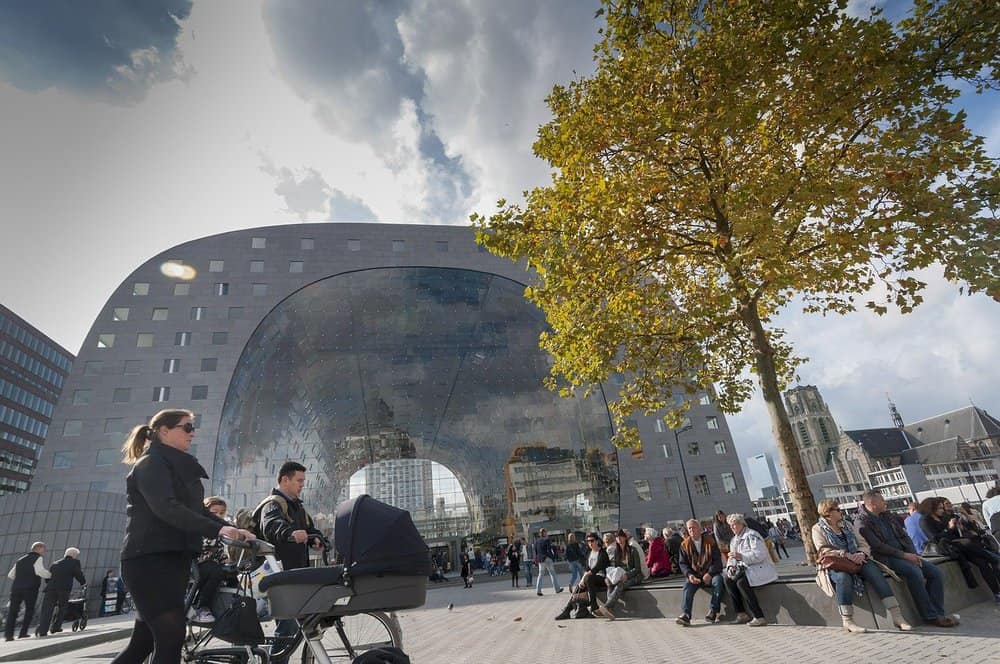 The Markthal is a residential and office building spanning across a central indoor market. The market stalls of the indoor market are framed by restaurants. Opened in 2014 the grey stone arc is closed off at both ends with glass windows, giving it an impressive and quite literally “see-through” effect. Its ceiling is colourfully decorated with an 11.000 m² enlarged artwork by Arno Coenen and Iris Roskam called “Horn of plenty”.
The hall is built exactly on the spot, where part of the old village Rotta (for more info read: A history of Rotterdam) used to be. A tenth-century farm was found seven metres under the ground. That and several other sides are exhibited in the staircase under the Markthal. 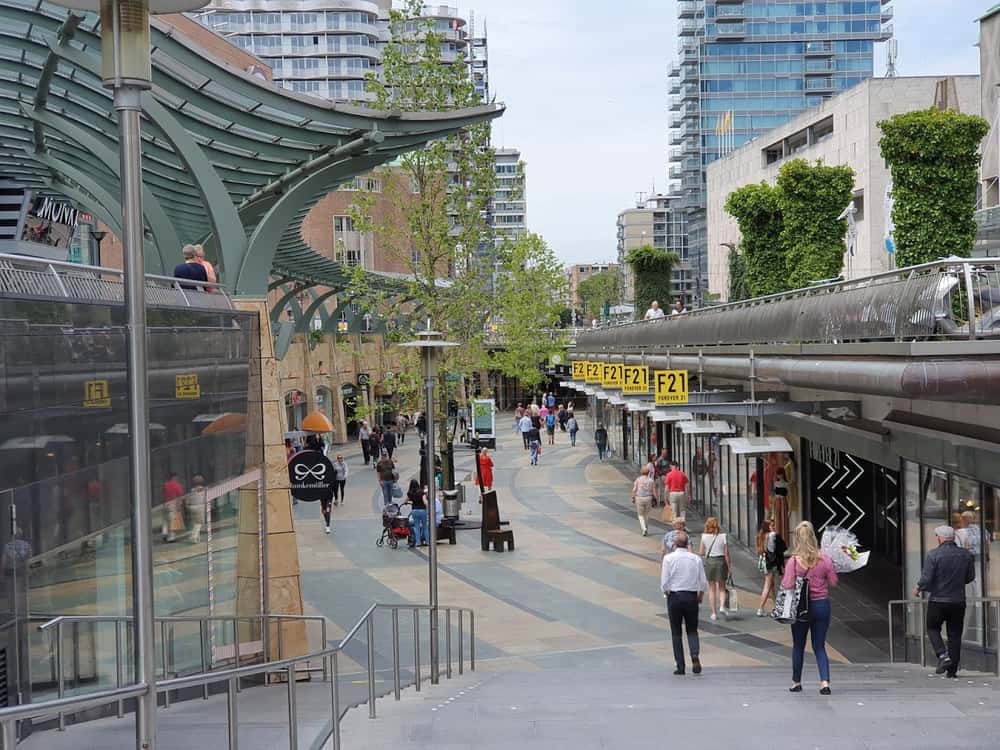 The shopping gutter, the name even being officially adapted by their own marketing, is the shopping street of Rotterdam. Located as the heard of the city centre, home to about 40 shops, it was opened in 2000. Build to dive below sea level an under the Coolsingel, it is certainly a fascinating bit of shopping architecture. 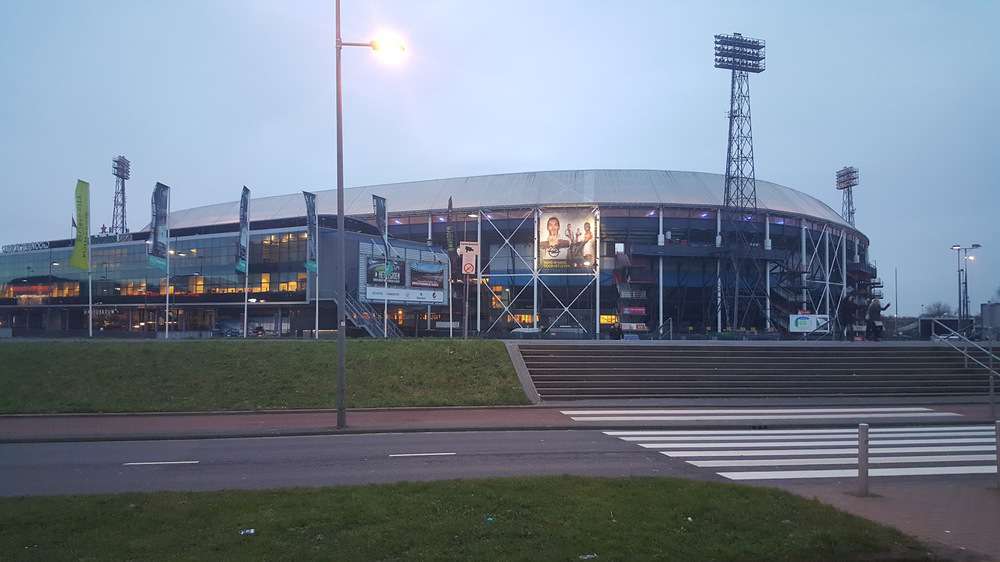 The actual name, Stadium Feyenoord derives from the Football club Feyenoord, which in turn has been named after the district Feyenoord in Rotterdam. Its nickname is due to its clean, oval look seen from above – looking like a bathtub. Opened in 1937 the stadium was built of glass, concrete and steel and two free-hanging tiers with no obstacles blocking the view. Johannes Brinkman and Leendert van der Vlugt designed the building which later even acted as an example to many other famous stadiums.

The Blaaktower was designed by the same architect as its neighbour the Kubus houses, Piet Blom. Overlooking the city centre the residential tower is a little more than 60m high. It has thirteen floors that are used for living, a general service area on the ground floor and a pointy, decorative roof that has no further use, apart from evoking the nickname “the pencil”. The levels are dived into six flats by concrete walls, just like a trivial pursuit piece and its wedges. The apartment block was opened in 1984.

Puntegaalstraat 23, a very impressive building that stands out overlooking the big and small sluices, two bridges, a massive roundabout, and a bit of the Euromastpark, used to be the tax office. Today an apartment block, but the name “pluk-me-kaal” stems from this buildings use as the central tax office. Back then, the name of the street was changed by Rotterdammers to and is still known as, “rob-me-blind” street. The Erasmus bridge, completed in 1996 and part of Rotterdam’s official logo, connects the north and south part of Rotterdam spans the river “Nieuwe Maas”. Designed by Ben van Berkel the bridge is 802 meters long and 139 meters high. It can partially open for very high ships and includes tram rails as well as car traffic, bike lanes and pedestrian lanes. Its most striking feature is its pale blue, but white looking colour. It has a single pylon, bent backwards, secured with 16 frontstay and two backstay cables giving it its striking, elegant look and nicknames.