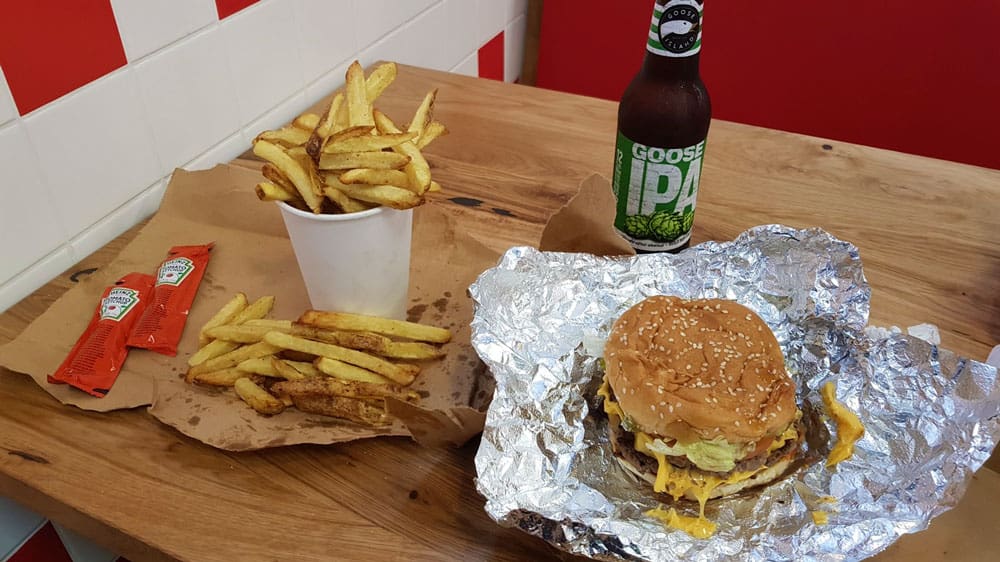 Five Guys Rotterdam Centrum
Hungry and craving burgers with fries? How about avoiding the traditional fast-food chains and opting for a restaurant that only serves freshly prepared buns, meat and fries? Five Guys might just be your kinda place.
Five Guys is a restaurant chain that is known for 'handcrafted' burgers and fries. What does that mean? Well, all the ingredients are fresh. The buns are made with eggs, flour, milk, sugar, salt, yeast, oil and sesame seeds but without any added chemicals. Interestingly, there are no freezers in the restaurants. So the meat is never frozen and the fries are freshly cut.

The place has a nice white and red colour theme going on. You'll also find that there are bags of potatoes lying around. Apparently, this is because otherwise there wouldn't be anywhere else to store all the fresh potatoes. 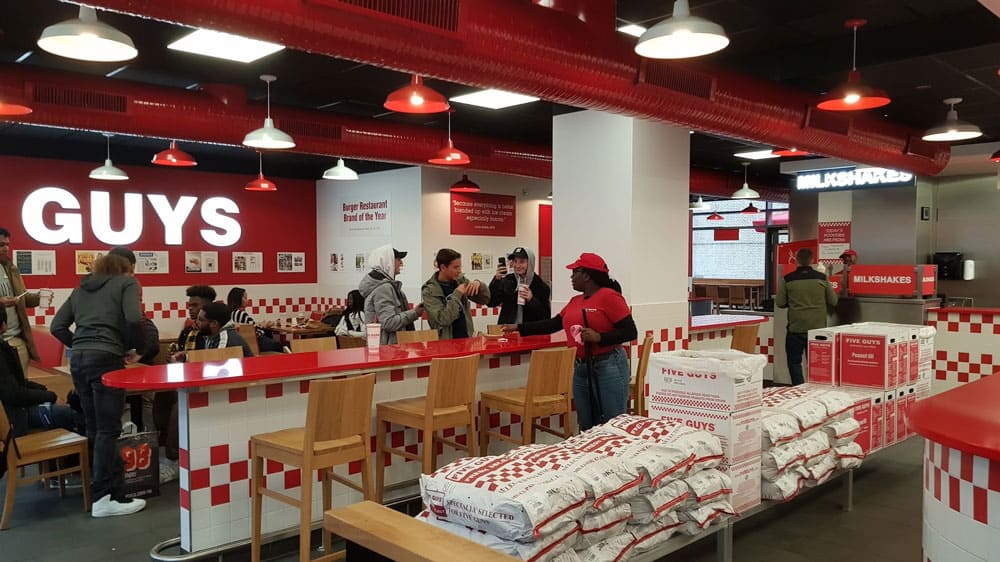 Five Guys Rotterdam Centrum
Sidenote: the music is kinda loud. I am so used to listening to podcasts or news while eating, that I was surprised that I couldn't. This isn't a dealbreaker, it's a burger joint after all. And I guess the music is there to add to the fun and casual American atmosphere.
Still, being the nerd that I am, I downloaded an app to measure the noise level. I swear I've never done this before 😂. The app measured 59 decibels of noise on average. Just sayin'. That said, it was very cool to scarf down a burger while listening to 80's rock and 90's alternative bands like Stone Temple Pilots, Bon Jovi etc. 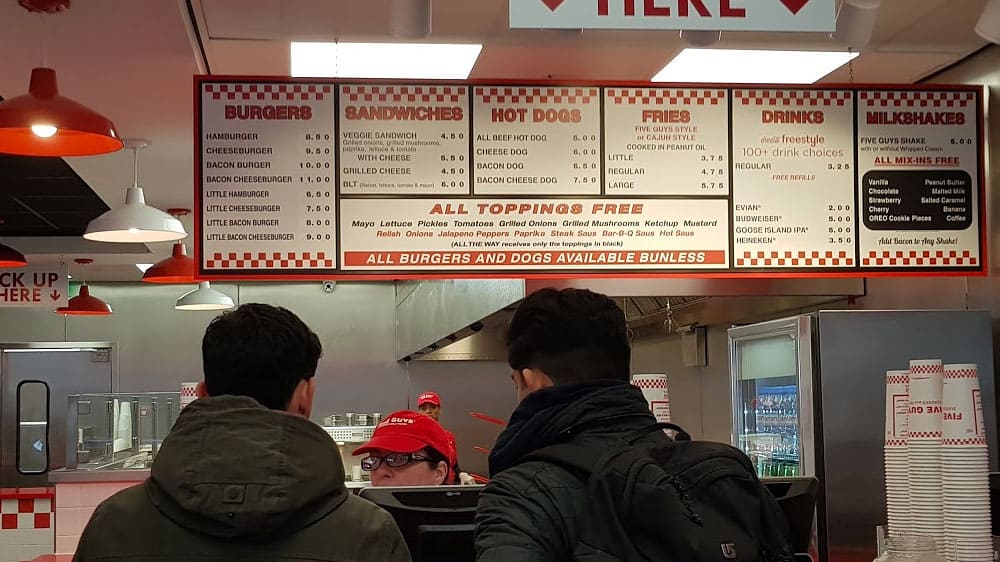 Five Guys Rotterdam Centrum
Once you order your meal, you're given a number and asked to wait. You can just go ahead and grab a seat but need to remain vigilant for when they shout out your number. Waiting times are way longer than at a traditional fast food chain, but that's because it's all prepared fresh. 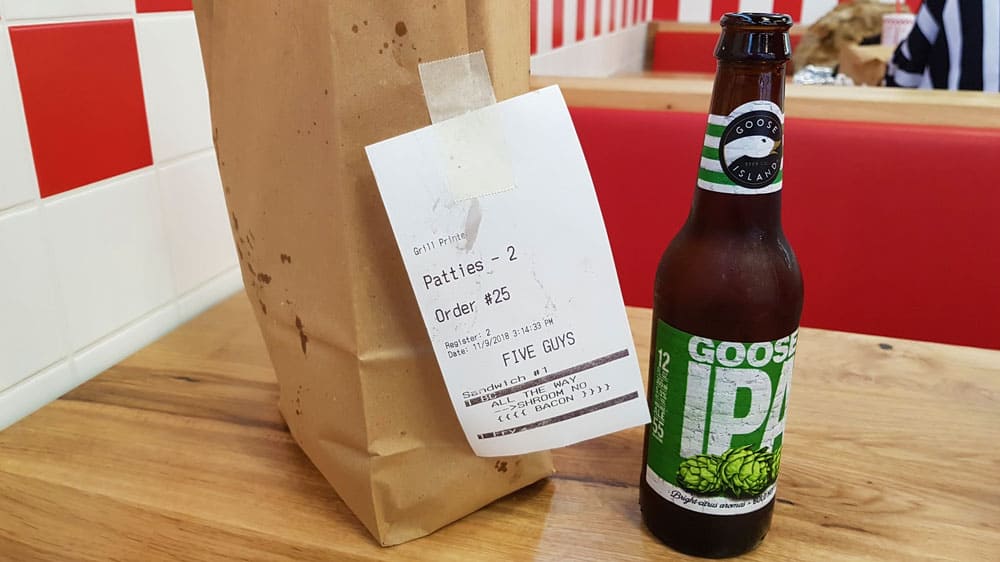 Is it greasy or fresh?

The food comes in a brown paper bag. I think there's something cool about a grease-stained brown paper bag. They also gave included a lot of napkins. At first, I thought 'what a waste', but then I remembered people wrote reviews complaining the burgers were greasy. Well what do you know, they were totally right and every single napkin was necessary.
As I was devouring this bacon cheeseburger, the juices kept leaking down my hands and the burger even started to fall apart towards the end. Is this a problem? Not really. The same thing happens when I try to make burgers at home. So to me, it kinda reinforced the idea that the burgers were fresh and that the buns weren't the same starchy absorbent bread used at better known fast food chains.
Last but not least, they serve beer. I tried the Ipa beer and it was surprisingly good. However, tastes differ, especially when it comes to beer. So be sure to try it out for yourself!

Lastly, some people have complained about the price. I won't decide what is expensive and what isn't, but I will say that €21 euros for a burger, fries and beer is a price that rivals the more 'culinary' burger experiences in the city. 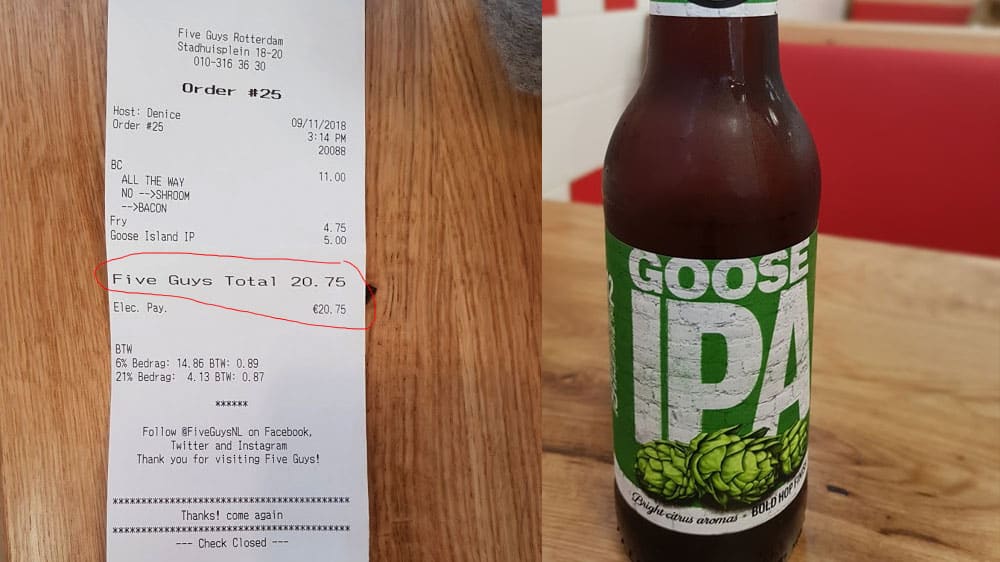 Five Guys in Rotterdam Centrum is located on Stadhuisplein, across the street from City Hall opposite places like Coconuts and Café 't Fust. You can't miss it! 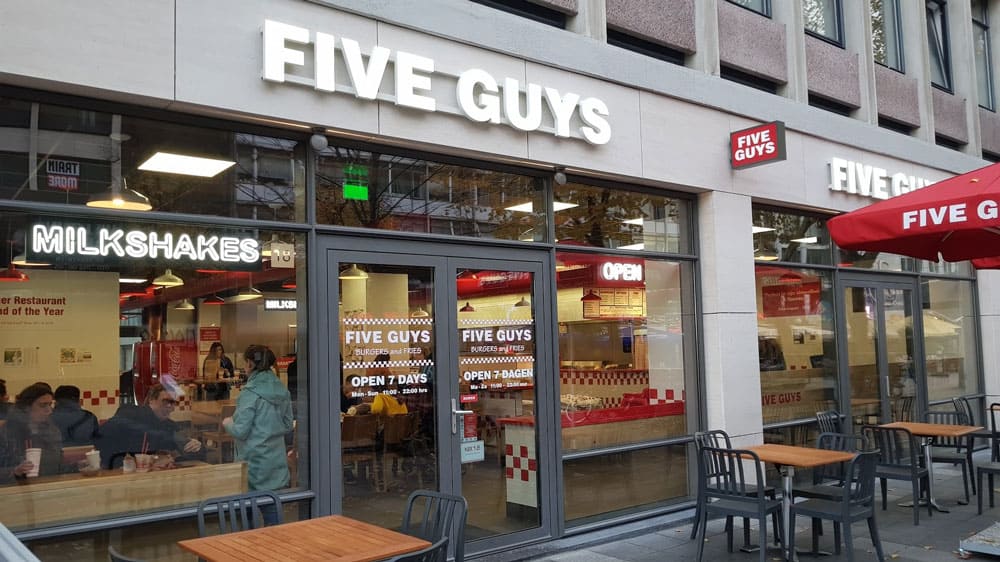