The 10 tallest buildings in Rotterdam 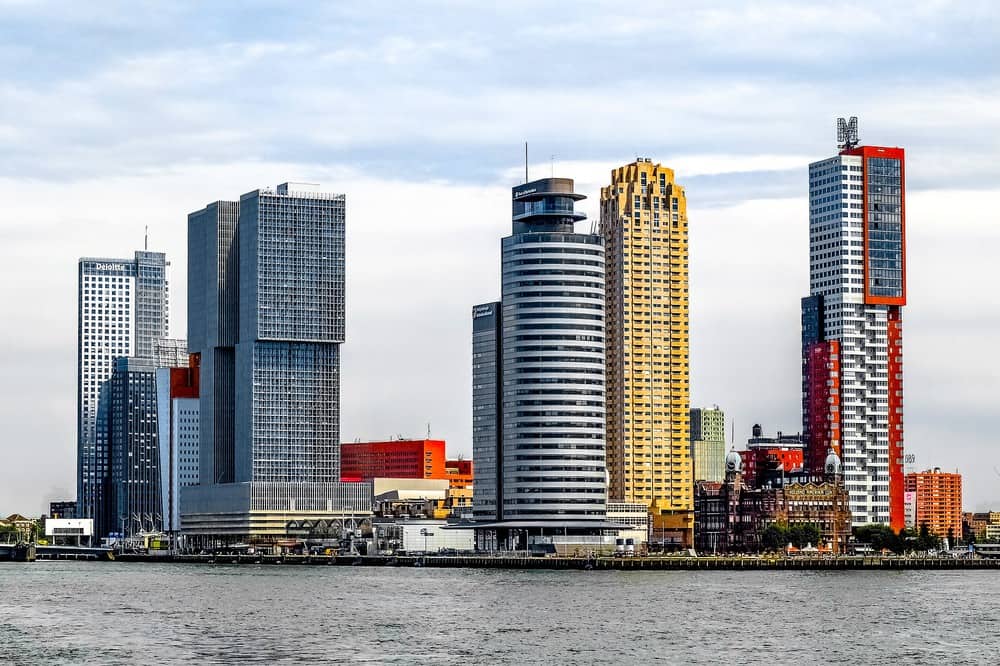 The tallest buildings in Rotterdam
Rotterdam is known for its modern architecture. Some even refer to it as 'Manhattan on the river Maas.' Of all the buildings, have you ever wondered how tall they were? We've made a list of Rotterdam's tallest current and future skyscrapers. 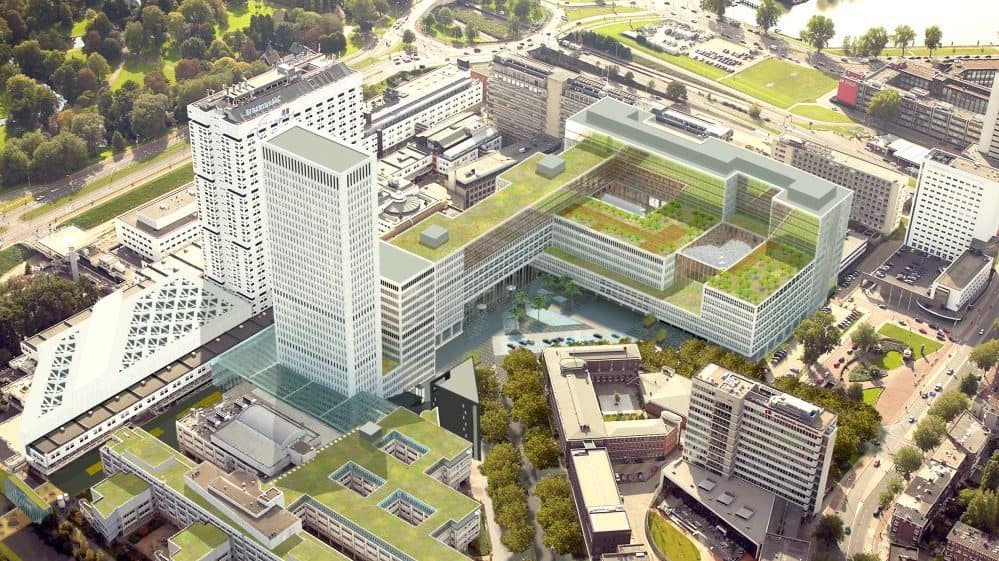 Erasmus MC Rotterdam 120 meters completed in 2012
Erasmus Medical Centre is large medical facility and teaching hospital in Rotterdam's city centre. It was originally opened in 1961 but renovated and expanded with an additional 185.000 m2 in 2017. The new buildings and tower were designed by EGM Architecten. The address is 's-Gravendijkwal 230, 3015 CE Rotterdam. 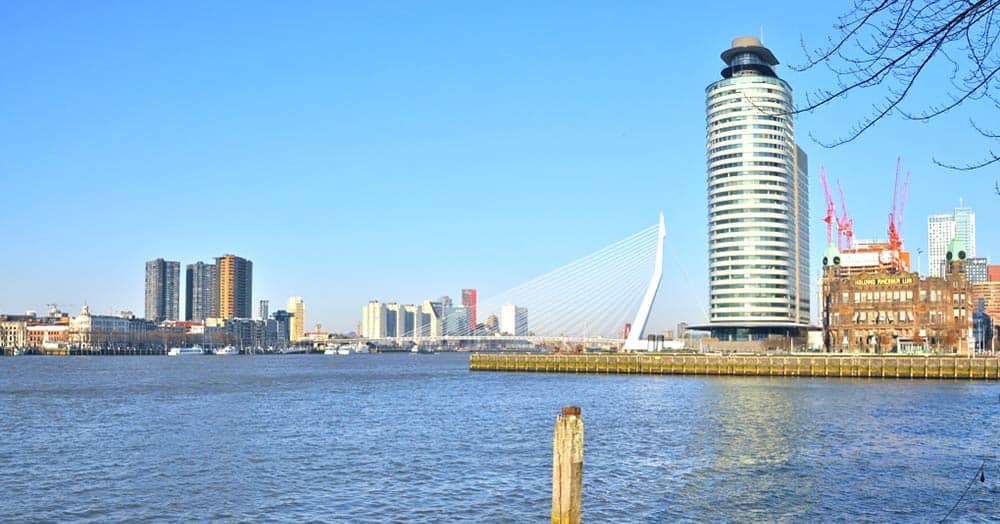 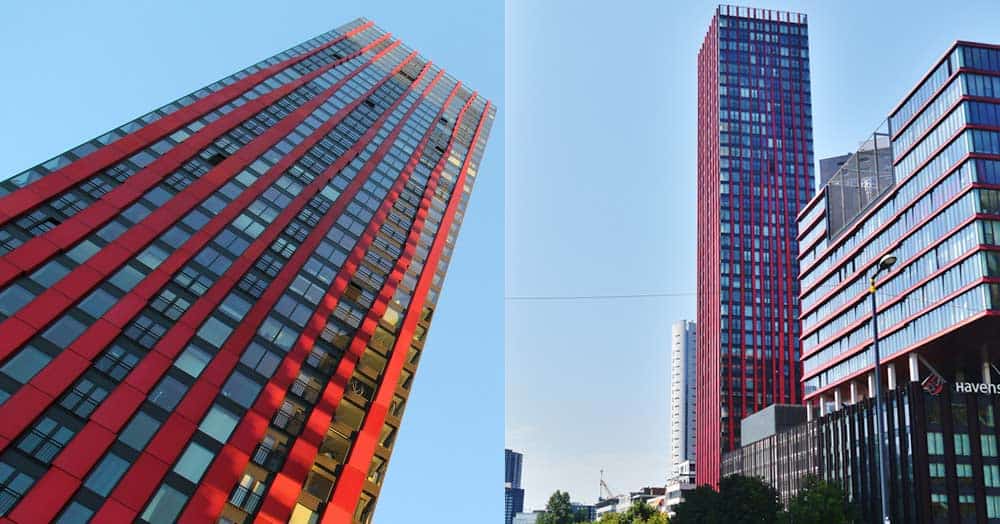 The Red Apple Rotterdam 127 meters completed in 2009
The Red Apple is a multifunctional building with a tall residential tower located on Wijnhaveneiland, in Maritiem District (maritime district). The residential tower has 40 floors and houses 152 apartments. It was designed by KCAP together with Jan des Bouvrie, a Dutch interior designer who focused on the lifestyle aspects of the building. The address is Wijnbrugstraat 140, 3011 XW Rotterdam. 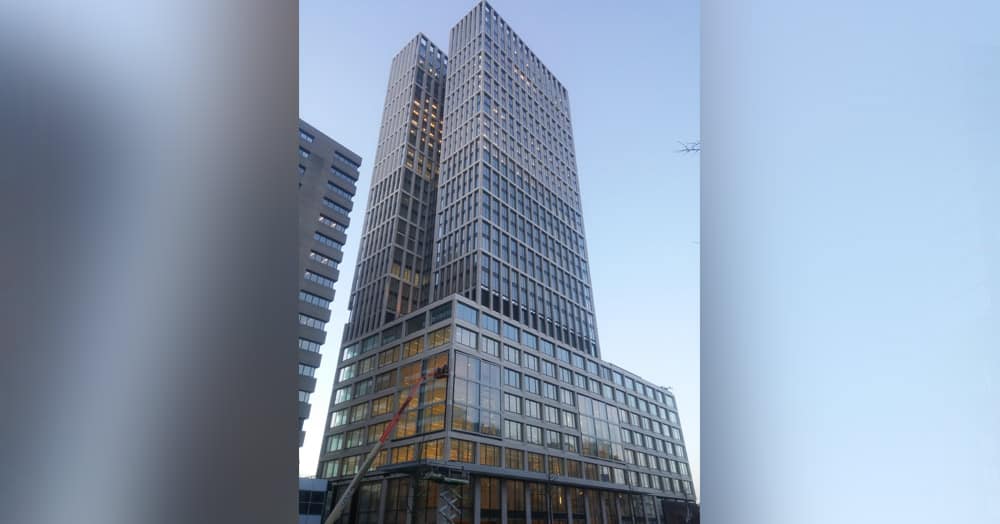 FIRST Rotterdam 128 meters completed in 2015
The First Rotterdam office building, located across the street from Rotterdam's central station is part of the Weenapoint complex. It has 31 above-ground floors and two floors below-ground. The building was designed by de Architekten Cie. and opened to the public in 2015. 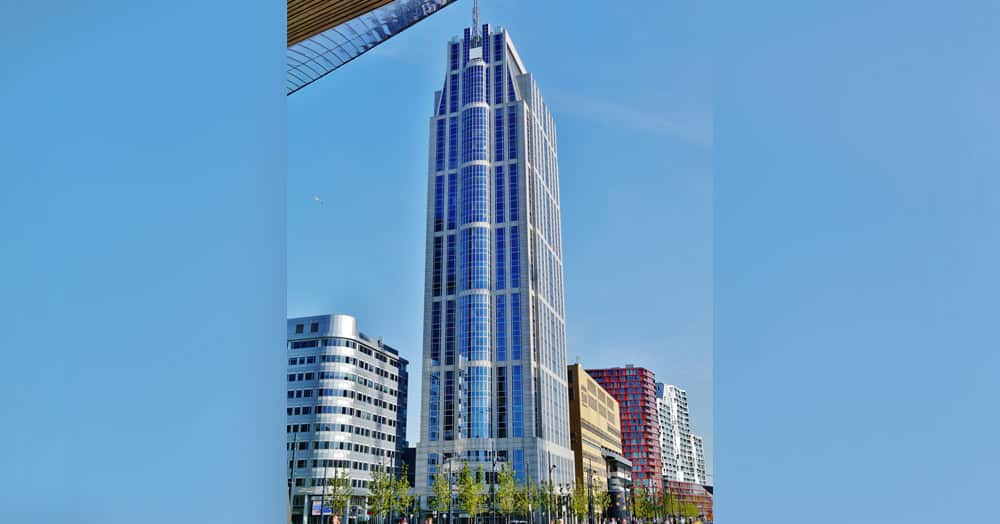 Millennium Tower Rotterdam 131 meters completed in 2000
The Millenium Tower, across the street from Centraal Station, is perhaps better known as the Marriott hotel. The building was designed by WZMH Architects alongside AGS Architecten and was completed in 2000. The address is Weena 686, 3012 CN Rotterdam. 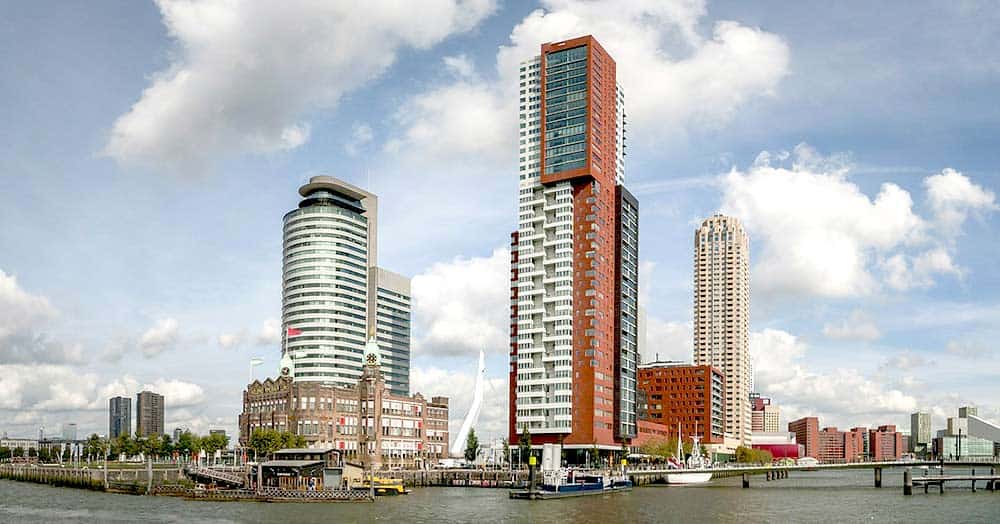 Montevideo 140 meters completed in 2005
Montevideo is a 43-storey residential tower designed by Mecanoo. The name 'Montevideo' was chosen because it was in line with the names of old warehouses which once stood in this area. These warehouses had names such as New Orleans, Baltimore, Santos and Havana. There's a large letter M on top of the building (invisible in the above photo) which is 8 meters tall and serves as a weather vane. The address for Montevideo is Landverhuizersplein 2-52, 3072 MH Rotterdam. 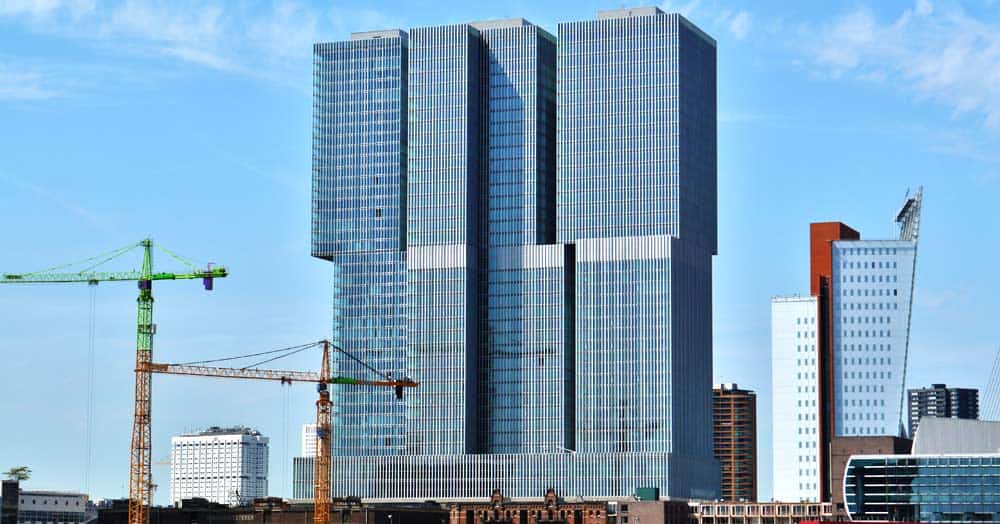 De Rotterdam 149 meters completed in 2013
De Rotterdam is a colossal building designed by Rem Koolkaas' Office for Metropolitan Architecture (OMA) in 1998. It features 72.000 m2 of office space, a hotel with 285 rooms, 2.500 m2 of fitness facilities and 240 residential apartments. Construction started in 2009 and the building was opened to the public in November of 2013. The address is Wilhelminakade 139, 3072 AP Rotterdam. 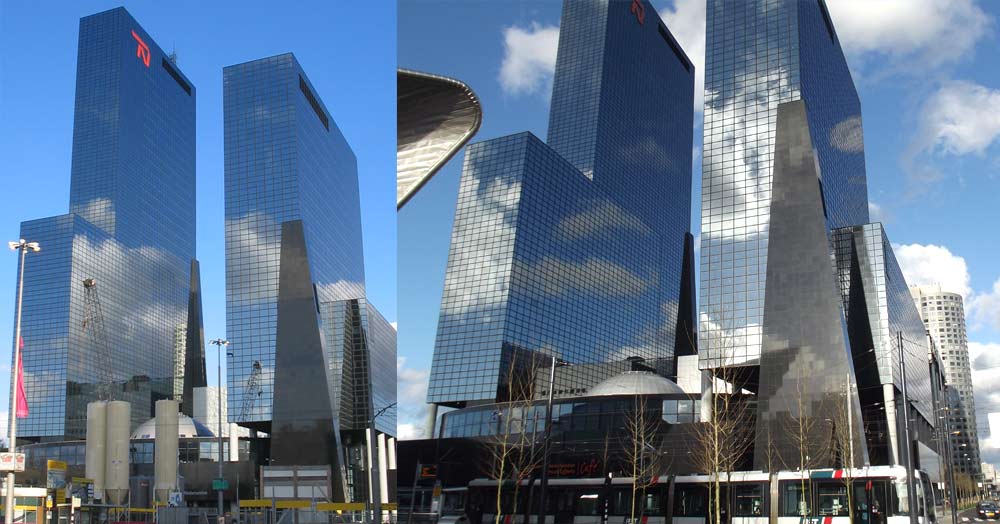 Gebouw Delftse Poort 151 meters tall completed in 1993
Gebouw Delftse Poort is a skyscraper complex consisting of two towers reaching the heights of 151.35 meters (Tower I) and 93 meters (Tower II) respectively. It's usually referred to as the 'Nationale Nederlanden' building. Moreover, its reflective surface often makes for stunning photography. The complex was designed by Dutch architect Abe Bonnema. The address is Weena 505, 3013AL, Rotterdam. 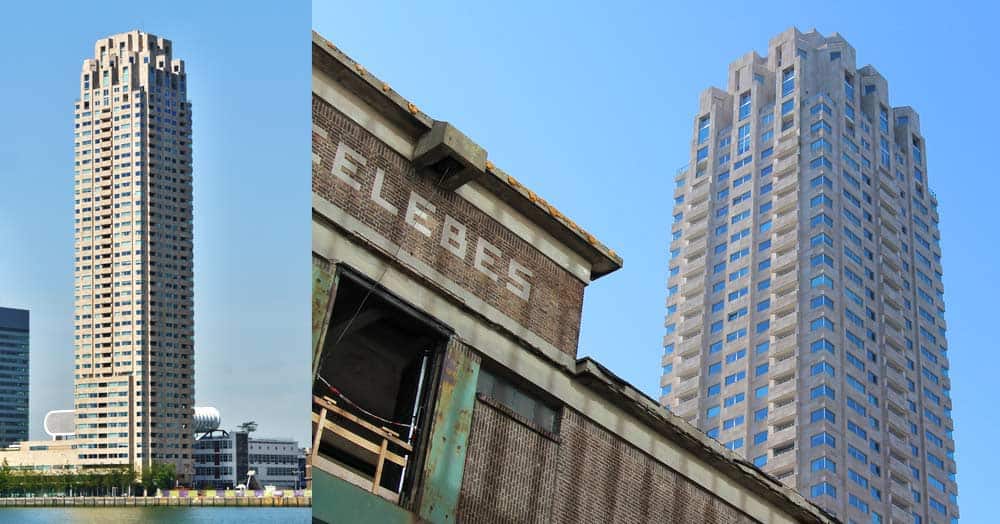 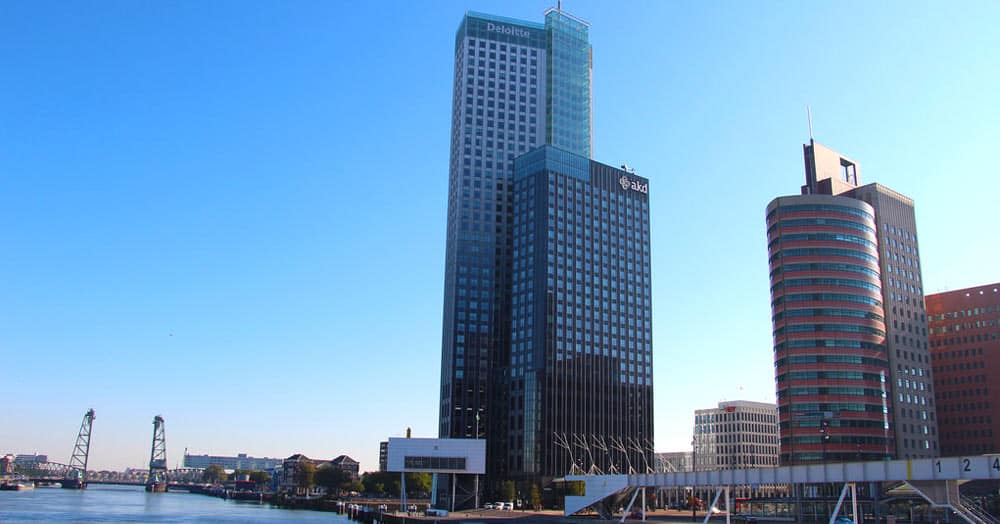 Maastoren 165 meters completed in 2009
Standing tall at 165 metres, the Maastoren is the tallest building in the Netherlands. This office building, which is home to the Dutch headquarters of Deloitte, was designed by Dam & Partners Architecten with support from French firm Odile Decq Benoit Cornette. An interesting fact is that the interior of the building is both heated and cooled with water from the river. Even the sprinklers are powered by river water. The address is Maastoren, Wilhelminakade 1, 3072 AP Rotterdam.