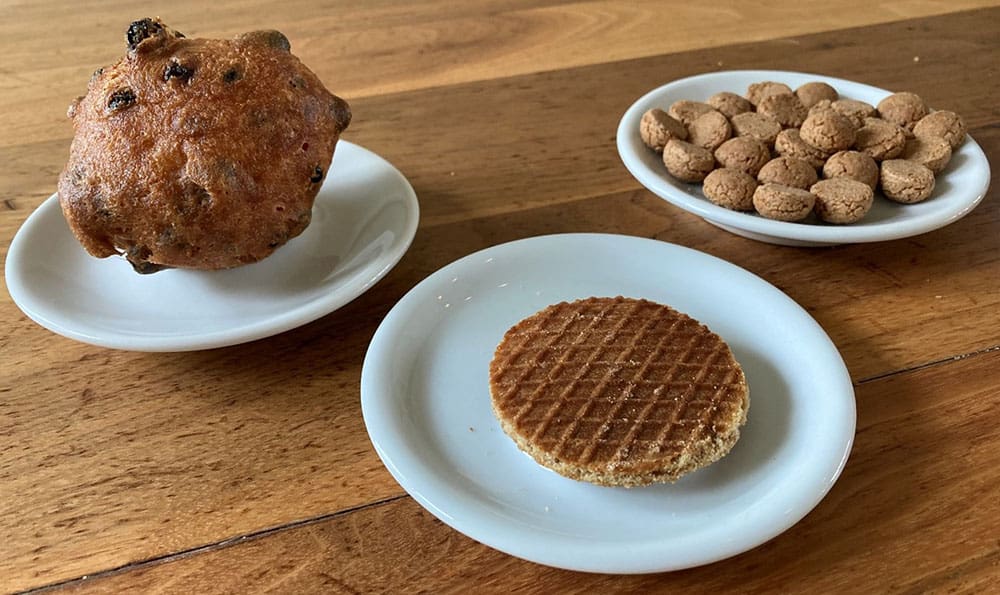 Oliebol stroop waffel and pepernoten/kruidnoten 📷 Anna Soetens
Pepernoot/ Kruidnoot, Oliebol, and Stroopwafel - the winter trinity of deliciously Dutch baked goods you need to know! Some are always in season, but there are a couple that are more specific to the winter months.
Disclaimer: To be honest the featured Stroopwafel is not necessarily a winter speciality. Nice and warm however it is very suitable for the winter month too. They are very Dutch, in fact, many people do not know them before they come here to the Netherlands. That is probably because winter specialities play a big part in childhood memories, so people tend to be a bit more traditional about them and like their local specialities best. But do give these a try!
So, here we introduce you to some places in Rotterdam where you can find a spectacular version of them. If, however, you would rather want to try to make them at home, creating memories and being 100% Corona proof, you will find tips and tricks for that at the end of this article.

First things first: technically Kruidnoten are one type of cookie and Pepernoten are another one. They are about the same size but differ in taste, texture, and colour. However, not even the Dutch themselves seem to always know the difference, even producers are confused by the names. So, I will explain what the two cookies are supposed to look. But do not be surprised if you find one or the other under the other one’s name! Right then.

Kruidnoten are little, mid-brown, crunchy, hard, round, winter-spice flavoured cookies. They are the main sweet surrounding the appearance of Sinterklaas, being thrown by his helpers in the fistfuls but can be enjoyed from the beginning of October really. They exist in their plain brown form, but you can get them in many, sometimes incredibly specially flavoured chocolate coatings turning them into proper sweets. You can get them in nearly every supermarket or Hema and drug stores, even your local health food store (for the slightly healthier version). 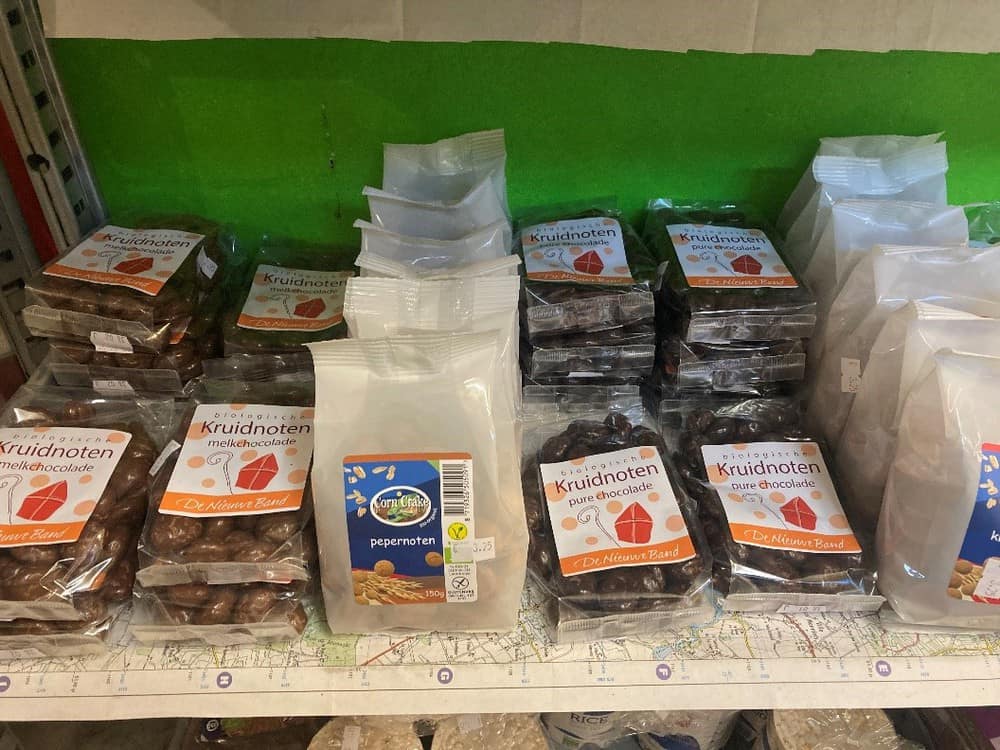 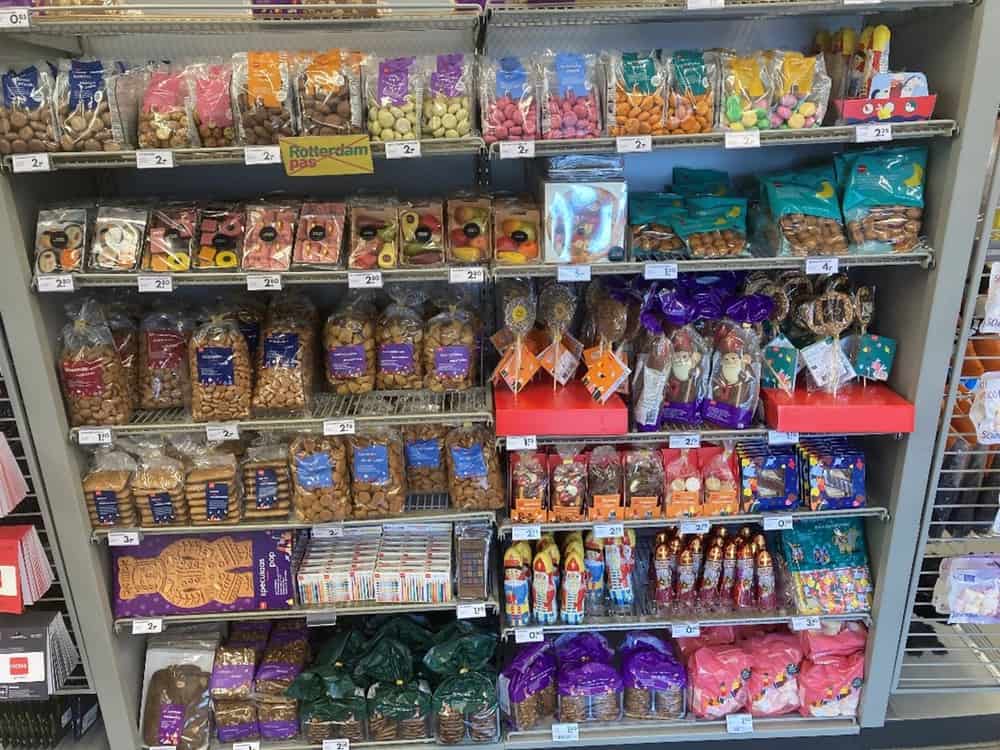 HEMA Sinterklaas sweets 📷 Anna Soetens
If you want to see their true range of interesting flavours and what they can be used for, then pop by the pop-up store in Rotterdam’s city centre. You can get them in raspberry flavour, split (yes, like in the summer ice cream), truffle and many more. You can even join workshops on how to make them once the café can open again for sitting down. For now, we suggest you go pick up a pack of an interesting flavour, maybe a peppernut flavoured beer, a tea or coffee with something delicious made with peppernut from the counter. For this deluxe experience that would make Sinterklaas happy, do go soon as it is a pop-up store. 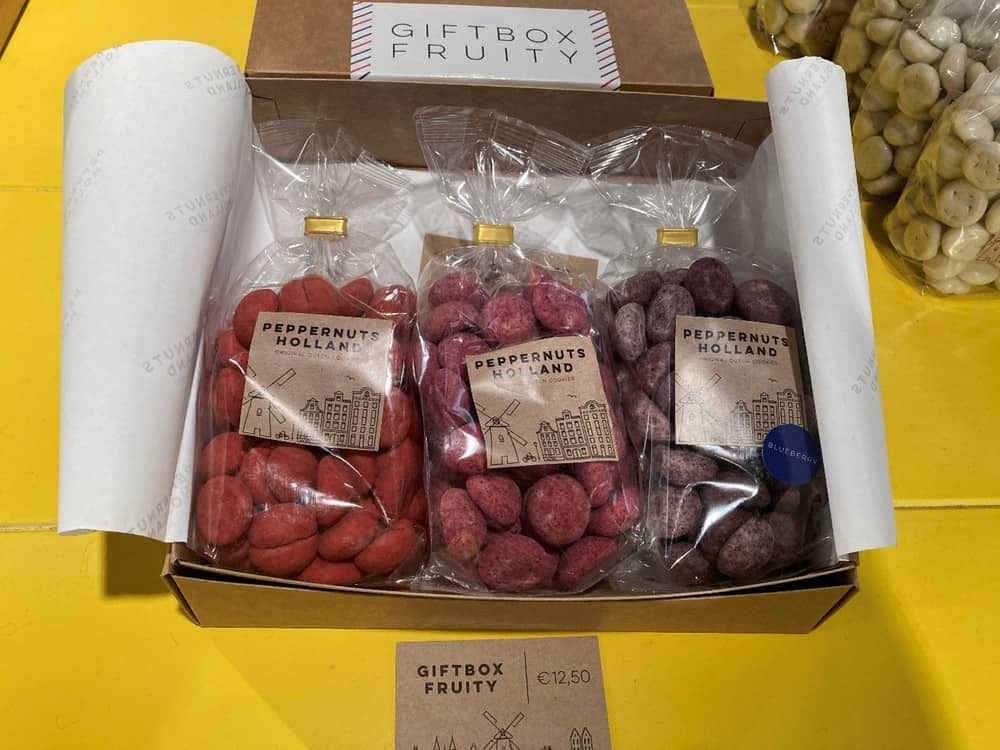 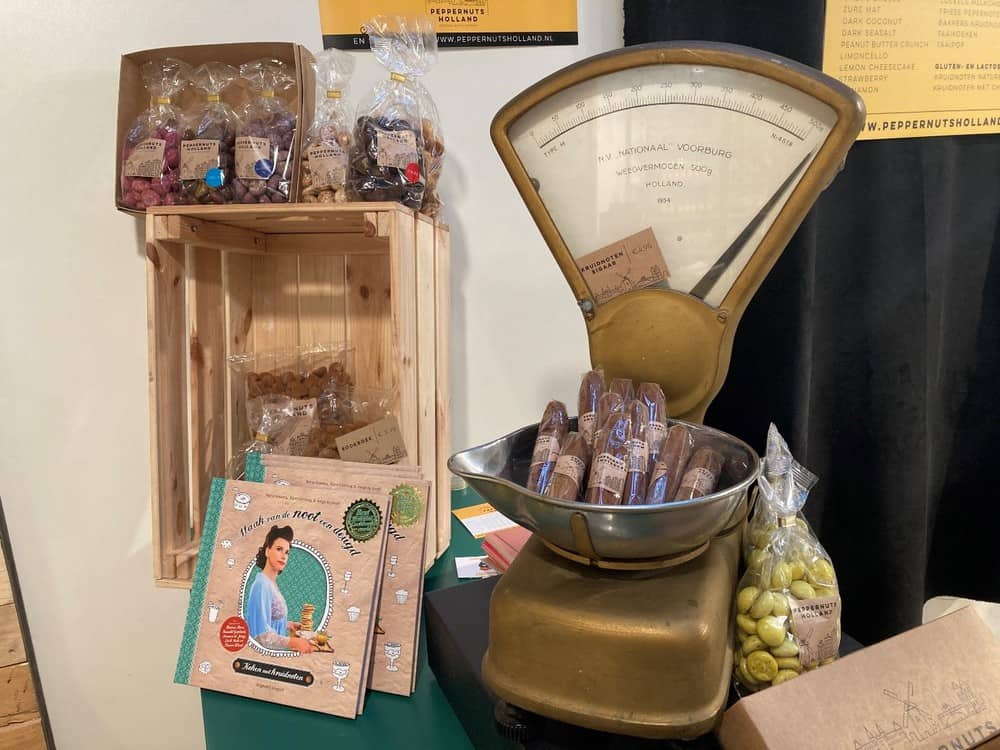 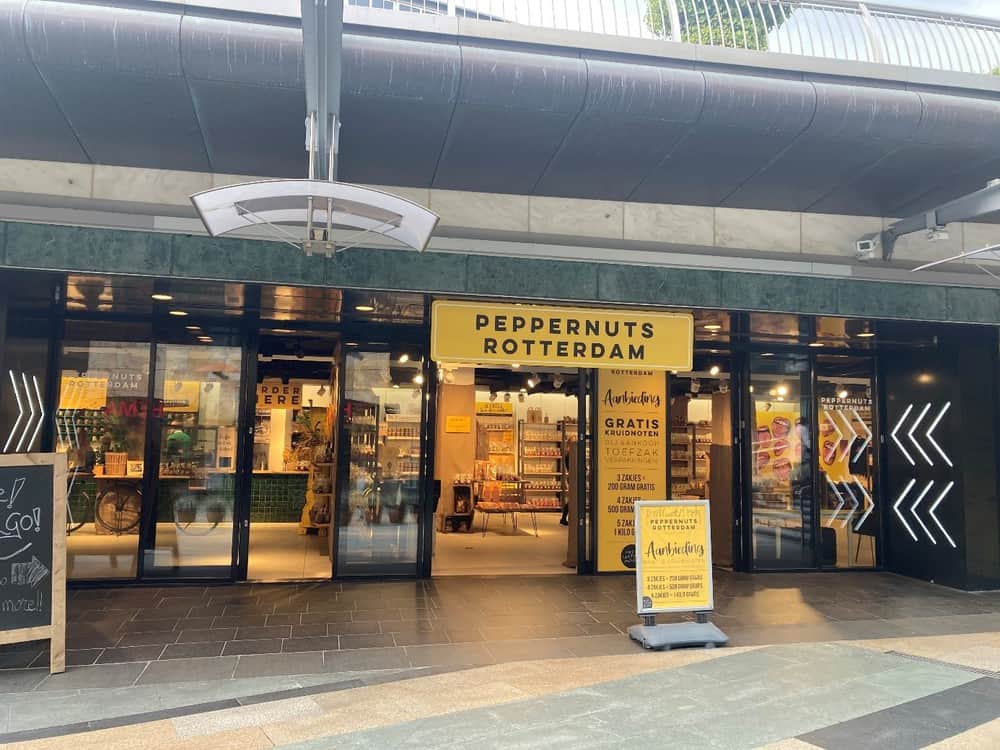 Curious and want to shop the difference? For authentic Pepernoten that are soft, gooey-ish, light brown, angular and have a stronger and distinct spice flavour go buy them at Jordy’s Bakery. No, nowhere else. Those are the ones. You might have to wait until November though. 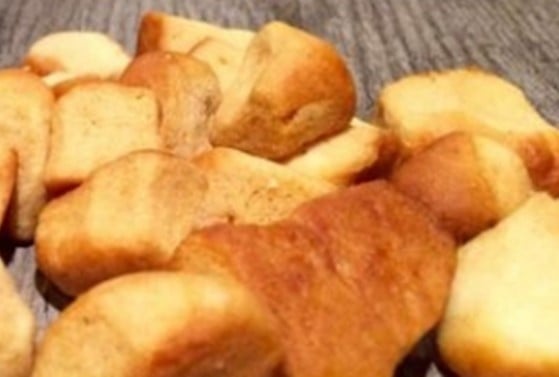 'Stroop-waffles' are exactly what the name suggests: two thin waffles cookies, well okay, one that gets split after backing in the waffle maker, sandwiched together by gooey caramel. Some cities and bakers have varieties, but the caramel is the classic Stroop. Apparently born in the Dutch Gouda somewhere in the 19th or beginning of the 20th century, they are now so Dutch that you can get them everywhere in the Netherlands. Again, not necessarily only to be enjoyed in the winter but an ideal winter snack nonetheless.
If you want the waffle with more luscious decoration in chocolate and sprinklings either for yourself and with coffee, as a children’s treat (come on Wednesdays) or as a present the inner-city shop DIDI’s is your friend. And do not mind the glossy appearance, you can really bring your kids in, the owner is well relaxed.

Stroopwafels with other syrup flavours at Stroop Rotterdam

Would you like to try a Stroopwafel that has another flavour in the cookie or the syrup, like sea salt lavender or lemon? Consider paying a visit to Stroop. Visit them in their location in Katendrecht or order here: https://strooprotterdam.com/

Oliebollen translate to Oil balls, which does not sound very tasty, but believe you me, they are lovely. Comparable to doughnuts, but rounder, fluffier on the inside and crunchier on the outside, they are also fried in hot oil. They are just showered in a bit of confectioner’s sugar instead of getting a thick glaze.
The real Oliebol has not the massive range of flavours on inside and outside like doughnuts (they come with or without raisins), but other than that if well-made and eaten within hours of their production they are so much better. Normally, you buy the bolls at stands throughout the city, and they are THE food to have on New Year’s Eve. In many countries, something fried in oil seems somehow a classic for the middle of the winter.
They can be bought from October to end of January, but if you want to buy them for New Year’s do plan in hours of time and expect seriously long waiting lines. This is also one of the very few occasions Dutch people will get properly upset if you try to skip the line.
The caravans with the fried goods pop up all over the city, but if you want the best you must come to the Hemraadssingel crossing the Vierambachtstraat in Rotterdam West. Usually, you buy not just one but a couple. This way you can feed your family and possibly your neighbours too, who might get especially interested in you if they see you with a bag. 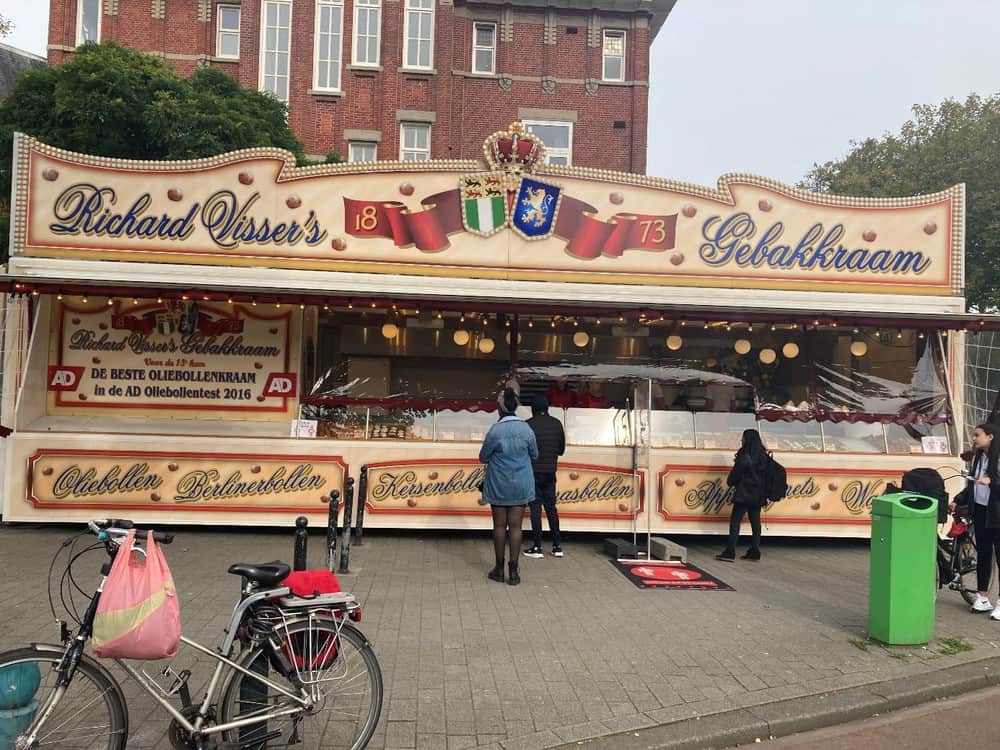 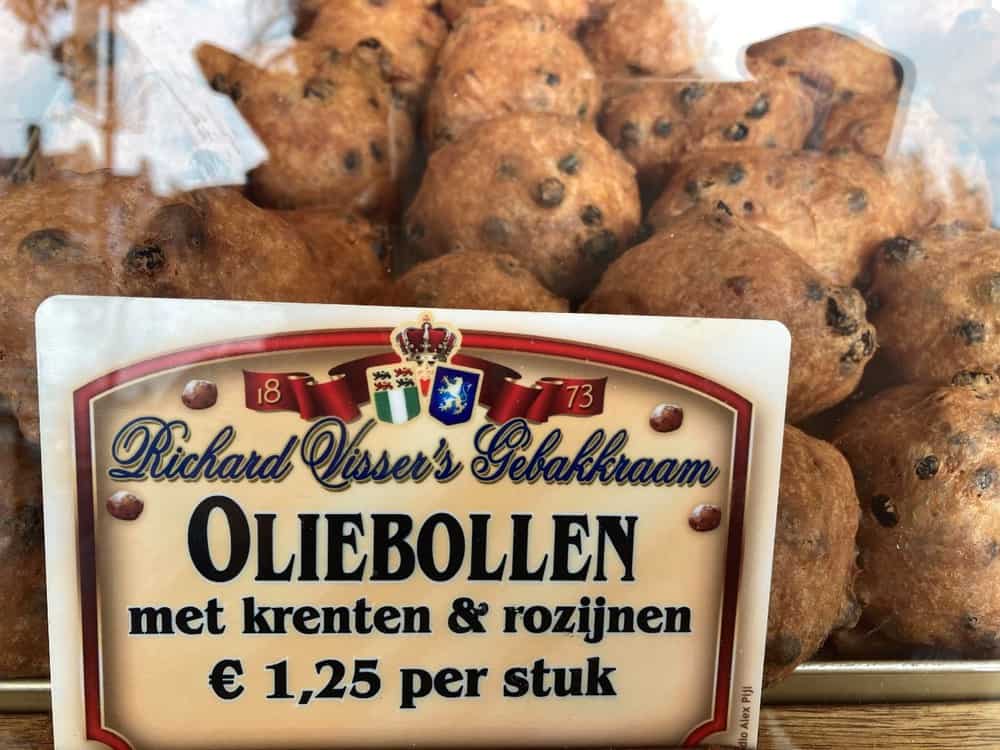 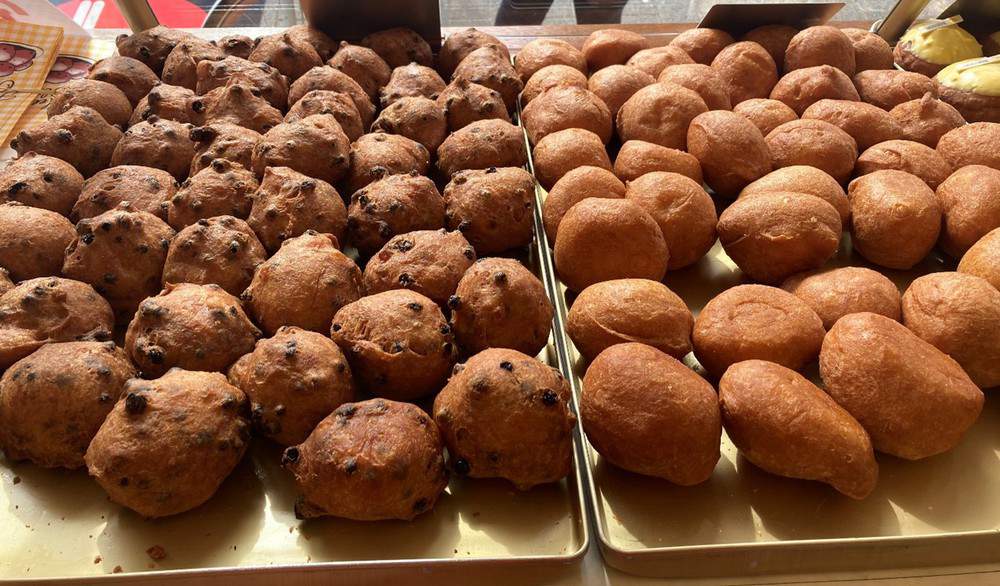 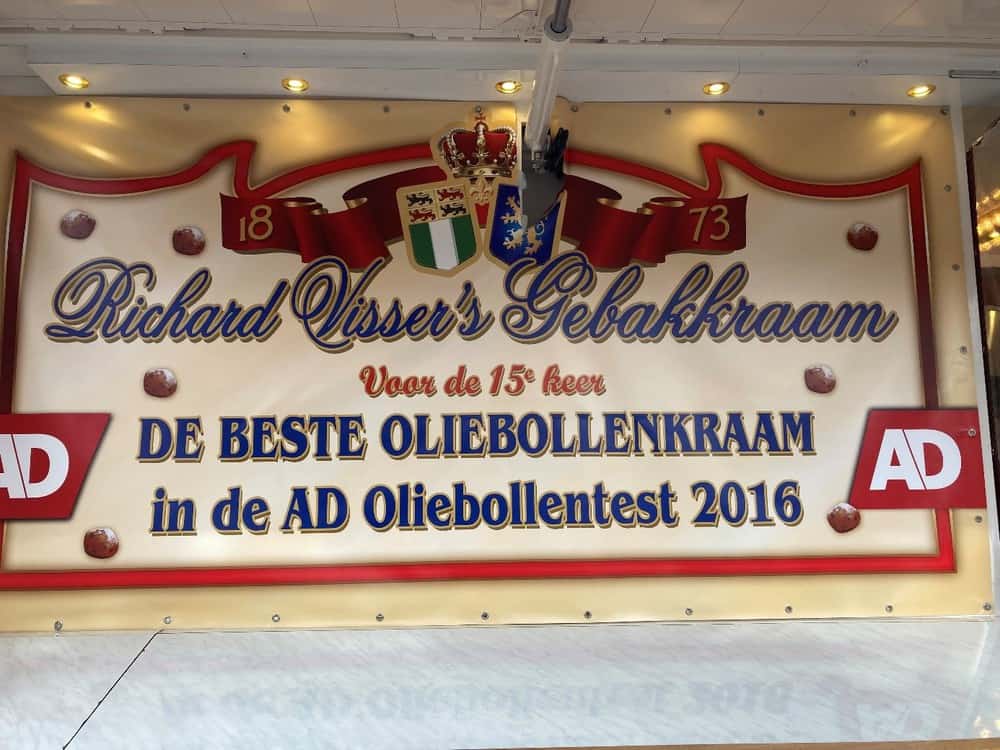 Should you wish to use a pre-mix, have some time on your hands and want the house to smell like it is that time of year again? Have a crack at making pepernoten, oliebollen or speculaas yourself! Either by using a pre-mix, for which we can warmly recommend the mixes of the “Schiedamse Molens”.
Head this away for your local Mill shop (http://demolenwinkelvandelfshaven.nl), or order online via Rechtstreex (https://www.rechtstreex.nl). 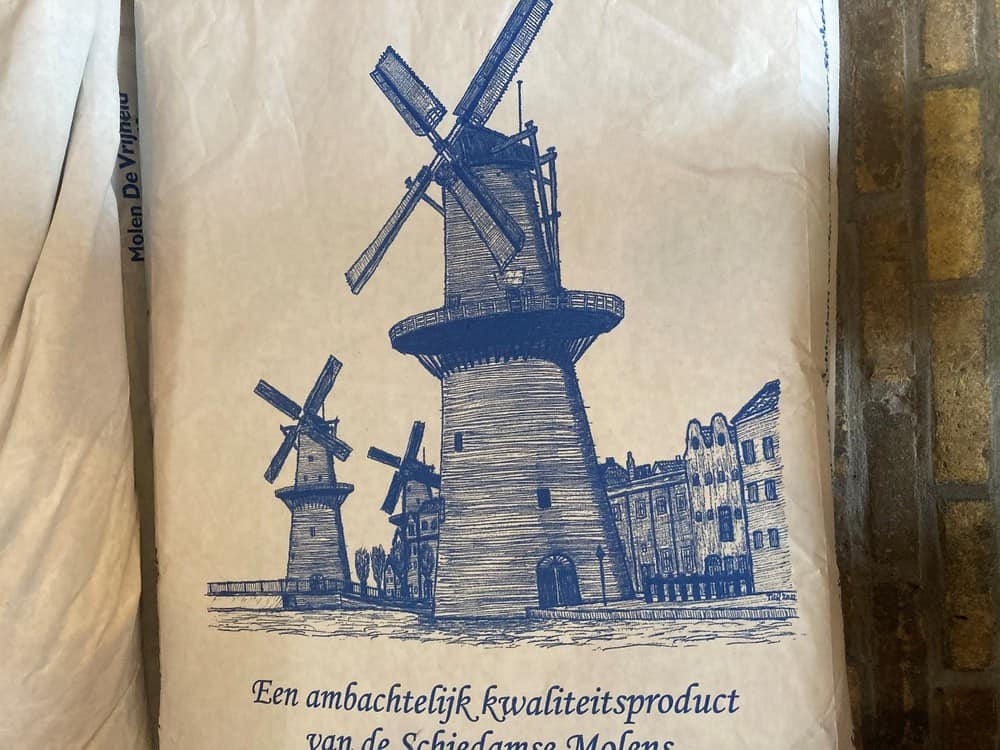 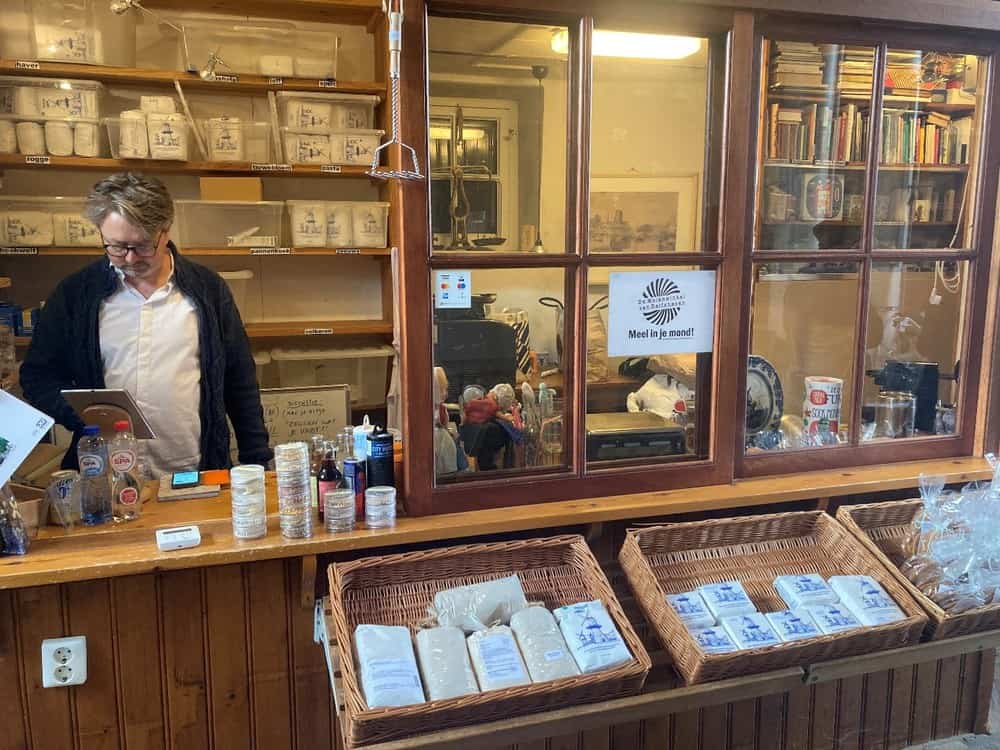 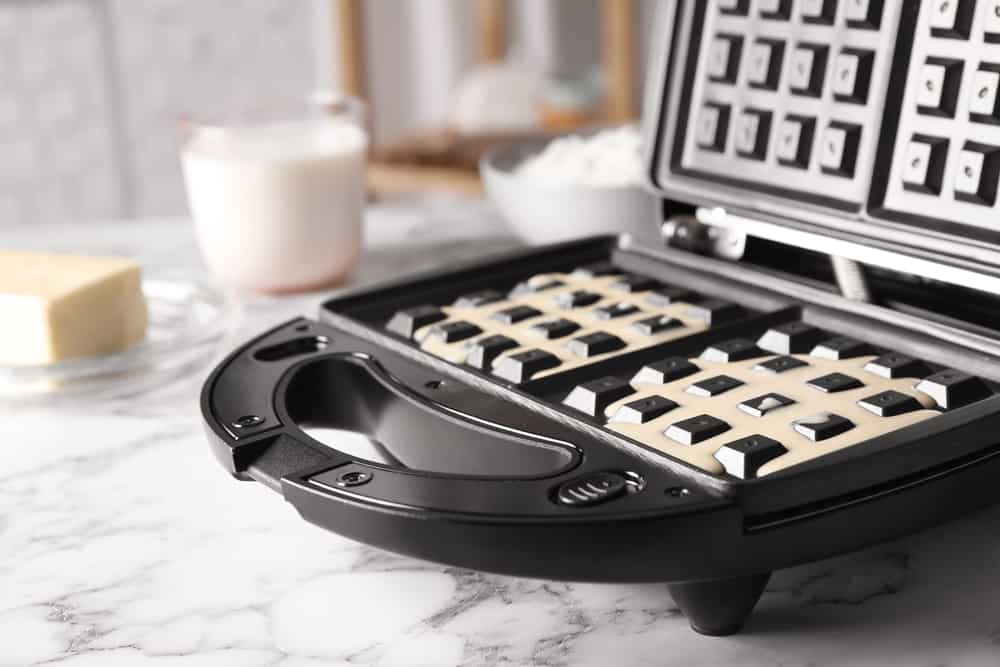 Waffle Iron do it yourself